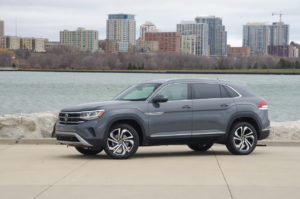 Truth isn’t far from fiction.  To wit:  the TV spot for 2020 Atlas Cross Sport.  It knocks conspicuous consumption—extolling the virtues of a low-priced car.    This notion echoed throughout the 60s as VW claimed it was the prime rib of economy cars.

Is the VW Cross Sport an affordable fashion-forward SUV?  It depends.  If you pine for a sleek Audi Q8 lookalike, then VW’s TKTS booth to SUVs that jettison the third pew and some cargo space has the sexier silhouette for thousands less.  Otherwise, the vehicle’s MSRP starts at $31,565 and climbs to $50,815.  The CS’s interior, however, is more Dollar Store than Neiman Marcus.

Due to its wide stance, the Atlas suggests Euro-themed sportiness.  Spoiler:  The 4,411-lb CS keels over when you twist the direction finder.  Yet, it tackles expressway cloverleafs competently; brakes are firm.  Highway tracking in foul weather is good.  The unique narrow-angle 276-hp V-6 mill and eight-speed automatic whisper.  I observed 21.6 mpg overall.

VW must fix the driver-machine interface.  Throttle tip response varies.  Sometimes it lurches.  In tandem with an auto-stop engine, which conserves fuel, you’ll get whiplash.  Ride quality is civilized, but it hops over some bumps.

This VW is comfortable.  The heated/chilled front thrones are well stuffed.   Heated rear-seat legroom is impressive.  The aft seatbacks reline or fold flat as Kansas.

Despite contrasting stitching and a well-padded steering wheel, the CS should wear a recycling logo with a 2 in it.  Acres of hard plastics seem wrong; the Sport SEL Premium lists for $49,745. You get a self-parking feature, though.

VW puts the V in vehicle connectivity.  There many USB ports, power outlets and a phone charging pad.  You get Car-Net, a telematic system which turns the vehicle into a Wi-Fi hotspot.  There’s a convenient handsfree tailgate.

Cross Sports with the standard 235-hp four-cylinder mill list for less.  AWD is optional.  Regardless, the CS seems ordinary.  It wouldn’t stir Ms. Olson, but Costco shoppers might approve.