Dormant vehicle. That was the subject of the letter I received, sometime in the early 1980s, from officials in Henry, Illinois, the town of about 2,500 residents where I lived, 35 miles north of Peoria.

I lived in a house with a large yard on the edge of town. My neighbor to the north was a soybean field. My 1957 Beetle, named Hildegard, had not been operable since 1977, and my efforts to try to restore her foundered thanks to a persistent lack of money.

So, she sat. Though the soybean field didn’t seem to mind, another neighbor took notice and did. In a way I didn’t blame anyone. Who wants their property being devalued by some old car?
I only had a one-car garage, and my wife was not about to give it up so I could park my old Beetle inside and out of sight. 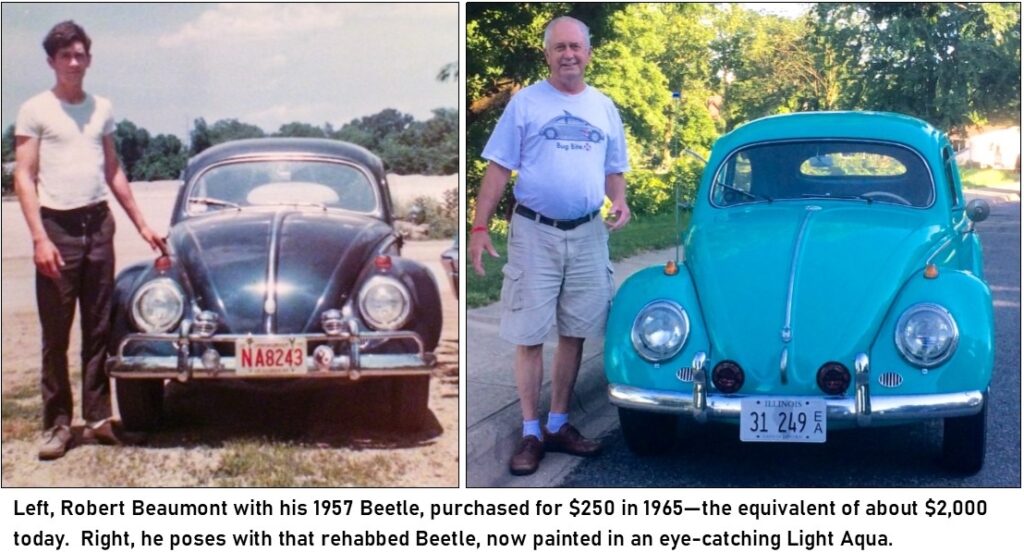 Anyone with a sense of proportion might have given up and had the little car towed to the junk yard. But Hildegard had a couple of things working for her. For one thing I really loved her, and for another, I was stubborn.

The city’s objection was that the unsightly car was visible to the public, and that made it a nuisance. I didn’t have the money to get the car running because sooo much work was needed. But I did have enough money to afford sections of stockade fencing.

I rolled the Beetle to a corner of the back yard and made it disappear inside an 8-by-16-foot barrier. Whew! The car was no closer to running, but at least the city was off my back. I had bought Hildegard some time and never heard any further complaints.

But for years she sat inside the 6-foot-tall prison, waiting for me to get her back up and running. I had left the battery in the car when its engine blew. This was the original 36-hp engine I reinstalled after the engine I had installed in 1969 blew in 1975! In both cases without warning.

The battery went dead. During the winter, the dead battery froze, then burst. When the temperature rose in the spring, the acid-laden battery water thawed and ate a hole in the car’s floorboard.

Because the battery in an air-cooled Beetle is under the rear seat, animals had access to an essentially bare interior. I had removed the seats, the door panels and the headliner as a first step to restoring the car but gradually discovered that I was never going to have the money complete the job.

Over the years, the Beetle was home to a feral cat that gave birth to numerous litters of kittens. The mother remained wild, but the kittens grew up tame because we always handled them and socialized them. When they were grown enough to leave their mother, we gave them away.

In 1993, with the last kid married and out of the house, my wife and I split up. She moved to Florida, where her family was from. We sold the house and I moved to nearby Chillicothe, Illinois, where a friend agreed to let me store Hildegard in an old one-car garage in return for mowing and maintaining the lot the garage sat on.

It’s 2020 and I’m still mowing because I have two more old Beetles there hidden from sight behind a stockade fence. As you can see, I’m a slow learner. One of the Beetles is a 1975. My daughter Alyce wrecked it 1990 when she was 16. She wasn’t badly hurt, but the car was totaled. I kept it for parts. (Its engine is now in my red 1964 Beetle, Esmeralda, purchased in 1970 for $600.) The second Beetle is a 1967 rust basket-case from upstate New York, whose official state mineral must be rock salt. I bought that from my son-in-law, and it’s too far gone but for parts, such as its transmission going into the ’64.

I drive my ’64 several thousand miles in a typical year after commuting in it for most of my Postal Service career. It’s logged more than 384,000 miles. I’ve only driven the ’57 a few hundred miles in the last couple of years because I’m still debugging the car. Overall, it’s traveled “only” about 182,000 miles. My winter car is a 2003 New Beetle.

After I retired, I was able to build a detached garage in the back yard in 2010 specifically to work on Hildegard without having to drive from Peoria to Chillicothe, where she had been stored since 1993. Eventually, I moved my 1973 Microbus, named Mikey, out of the two-car attached garage and into the detached garage, opening a spot for Esmeralda. Mikey, by the way, was bought in the mid-1980s, hasn’t run since about 2005, and I work on it as I have time and interest.

Over time, I had detached Hildegard’s body from the chassis and removed all the window glass. Now that I had an easily accessible garage, I really set to work. I kept nibbling away, day after day, month after month, year after year. Many times, I was weary and disheartened, but I never gave up.

By 2015 I was able to hand off the rust-repaired shell to a body man for detail work and a paint job, interior and exterior. I picked a bright color from the Hot Licks chart called Light Aqua. It’s an authentic 1950s-era color but also highly visible, unlike many colors from that period, and I wanted the car to stand out as well as possible on the road, mainly for safety. You never want to hear, “Didn’t see you, man!”

Cost me $5,000, and when the body work was done, I had a freshly painted empty body shell that I needed to mount back onto the chassis and rewire.

This 20th century classic even has some 21st century technology in the form of a backup camera attached to the bottom of the license plate. A suction cup holds the video screen to the windshield thanks to a blob of clear silicone – a simple installation that enables safer backup. The 1957 Beetle was the last to have the tiny oval window, which was enlarged for 1958.

The camera is wireless and only needs to have the screen and the camera hooked up to a power source turned on when the ignition is on. The top switch on the dash serves the purpose of the backup light switch on a modern car and allows me to turn on the monitor screen when backing up.

Beetles lacked a gas gauge until 1962, and previous models had a flip lever to activate the reserve tank. In addition to installing an aftermarket gas gauge, I added oil pressure and temperature gauges, plus an AM/FM radio. The passenger grab handle is a VW part but didn’t come standard until 1961. 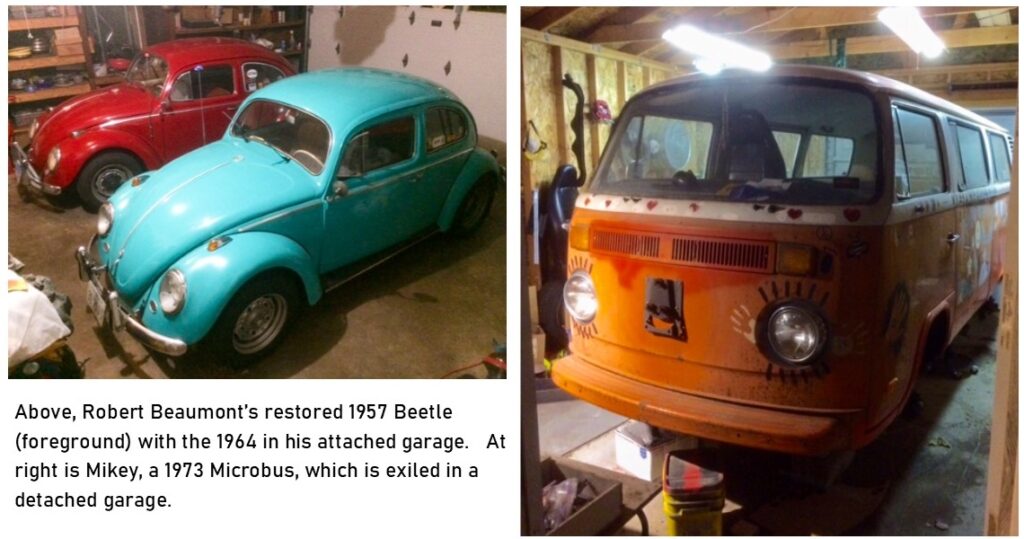 I’ll probably never be completely done with the car. There will always be one more thing. But I have largely accomplished what I set out to do, 40-plus years ago, for my beloved 1957 Beetle.

Still, it’s hard for me to enjoy my old cars as much as I’d like. I worry over parking them. I worry over tailgaters. In many ways the cars are like children to me. We’ve been together for so long – 50 years for Ezzie and 55 for Hildegard, whose name was suggested by my sister Suzanne because it had a Teutonic ring to it.

They take care of me and I take care of them. I nurture them and they nurture me. And for Hildegard, against all odds, she hasn’t traveled her last mile after all.