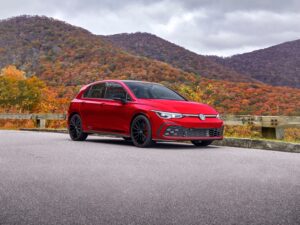 Like a bad day at an airport, VW’s Tesla-fighting Project Trinity ETA is behind schedule.  Reported software delays mean it won’t arrive until 2030.  Earlier this year, VW announced a new Trinity plant and sedan with a 2026 debut.

Some 2021-2023 VW Atlases and Audi Q5s have connecting-rod defects. Faulty parts could cause engine noise, engine failure and engine fire.

VW sent instructions this month to its dealers explaining how to inspect about 74,067 SUVs for faulty parts.  About two-percent of these vehicles are affected. According to VW’s chronology, this recall likely covers Mexican-made 2.0-liter engines.  The recall notice, however, doesn’t state whether VW’s V-6 or 2.0-liter four-cylinder is problematic.

VW/Audi recalled various Audi A3/Q3 and VW models manufactured between late 2018 and early 2022.  The TPMS might take too long to alert drivers if all four tires lose pressure at the same rate and time.  A software update should fix this. 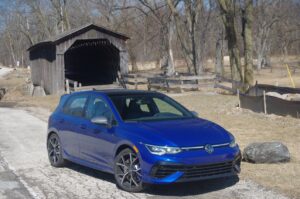 VW invites you to discover automotive fingerpainting.  Choose your canvas, a snakey roadway is perfect.  Your paintpot is a turbocharged 315-hp Golf R.  Get in.  Adjust the shell-like front throne.  Grab the steering wheel.  Apply the pedals.  Press start.  Zero-to-60 mph is yours in less than five seconds.

This $44,640 R-tist went to an automotive art school.  You feel like Jackson Pollock as you pour it down the road.  It inspires confidence with proper steering effort, unflappable chassis and prompt directional changes.  Plus, the R stops as well as it goes due to two-piece, cross-drilled front rotors clamped by blue calibers via a firm brake pedal.

Touched by a Demon

There’s a fly in this car’s painterly ointment.  Much like kids who over-express themselves while finger-painting, VW mucked up its driver interface with a touch/talk/video display scheme.  This replaces conventional gauges, buttons and dials.  While the steering wheel’s touch-action “switchgear” is nicely illuminated, you can inadvertently brush sensors.  Likewise, tapping the infotainment screen’s virtual home button while driving is like operating a vending machine while twirling a hoola hoop.

VW’s Bizantine climate setups could cause a mental meltdown.  It has three folders:  Classic View, Smart Climate and Air Care.  There’s a cold/hot-feet setting.  If your brain’s overloaded by choices, leave it in automatic. 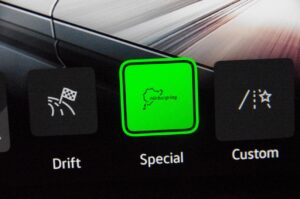 There is a blast of sorts:  finger-dialed chassis/engine drive modes.  These settings make driving, as with painting therapy, pleasurable.  May I direct you to the blue R logo on the steering wheel’s left side?  Rub it.  Then, the touchscreen’s drive mode menu expands:  race, drift (serious tire painting), sport, comfort and individual.  Want Eco?  Sorry Charlie, this isn’t your auto.  The R, however, prompts you when to shift or coast for best fuel economy.

The Golf R’s snubbed suspension seems resilient despite rolling on 235/35R19 tires.  Body roll is minimal.  This car’s stout body feels like it’s an ingot.  A creative driver gets support—switches for power seat controls. The split-folding rear seat with ski pass thru is upright but supportive for two.  Aft passengers back get face vents, seat heaters—and yes there’s a touch panel.

Inside, VW went hardcore with hard plastics.  Typical VW niceties such as cloth-covered A pillars, plentiful soft-door card areas and an overhead eyeglass bin are conspicuously absent—even the hood’s hydraulic lift is awol.  VW offsets this with interior ambient LED lighting and an R puddle light. There’s no spare tire.  You can slide a road bike (wheels attached) into the rear hatch and then close the lid.

The R can park itself.  Touch a dedicated spot and you’ll receive directional instructions while the R twirls the steering wheel.

The VWCA (Volkswagen Club of America) is a not-for-profit hobby club for owners and enthusiasts of Volkswagen and Audi automobiles. Founded in 1955, the Club has followed the evolution of Volkswagen from the early air-cooled Beetle to the latest models to roll off the assembly line. We are not owned by, affiliated with or sponsored by Volkswagen AG or Volkswagen of America, the Importer. The Club is operated and managed solely by volunteer members who contribute their time and energy in pursuit of our motto, "to help Volkswagen and Audi owners enjoy their cars to the fullest." Read about the club's history.