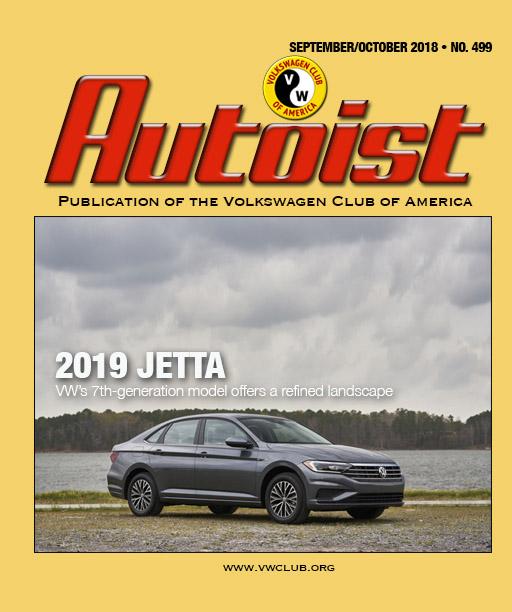 VW’s Jetta began its rise to the brand’s American best seller as a fuel-sipping deluxe subcompact sedan. Due to its budget BMW aura, it made saving money fun.

The Jetta’s journey detoured in 2011. That’s when VW foisted the price-conscious sixth-generation model on us. It savagely cut back Jetta’s nice bits, including its Mercedes-grade interior. Hard ill-formed plastics turned the cabin into a prison cell. Mechanically, the steering, rear brakes, rear suspension and engine lost their class-leading ways. While this fit a low-price marketing necessity, it departed too far from the car’s Teutonic roots.

Jetta’s styling follows current automotive fashion — fastback roof and pleated flanks. Yet, the hood’s strakes and ribbed side panels are deftly executed. Only a slightly proud rear side door marred this gem.

Inside, it’s roomy. Sanitary light-gray plastics and a cloth headliner prove an airy environ. Hexagonal shapes organize the decor. VW’s new eight-inch infotainment screen is smoothly integrated into the dashboard. My SEL Premium tester expands your video vista with a large Digital Cockpit or instrument cluster. This bright screen is crisp and configurable.

The power driver’s seat offers generous leg and back support. You can chill it or heat it. Soft-touch door cards and dashboard pad enhance the driver-focused setting. It wears the GTI’s leather-clad steering wheel and automatic climate controls — a welcome upgrade. Headroom and legroom are generous. Pedal placement is proper, too.

Economy size includes penny pinching. Hard plastics surround aft riders. Comfort, though, is good due to generous head and legroom. The right front seat lacks height and tilt adjustments, and the trunk portal via the 40/60 split rear seatback isn’t neatly finished. The rear-side headrests aren’t adjustable. The trunk lid annoys. It pops open and then later bangs your head like an angry bird. You must pull it up to a detent. The back seat lacks face vents and power outlets. The driver gets a lighted phone alcove with nearby USB port and 12-volt outlet — ideal for Android Auto or Apple CarPlay. The Beats-branded tunes player sounds good. There’s a CD player, too.

VW relies on a 147-hp turbocharged engine with eight-speed automatic transmission. It’s a hurry-to-top-gear setup that reduces fuel consumption. I observed 35 mpg overall with 40 mpg on one highway trek. EPA estimates are 30 city, 40 highway, 34 mpg combined. Because the engine rpm at less than 40 mph is 1,250, it thrums, causing a drum-like resonance. Sometimes the turbo kicks too abruptly. Pick sport mode, either via a button or the shift lever and the engine revs higher. This makes the moderately powered vehicle more responsive.

On the highway, the Jetta shines. The engine politely churns a miserly 2,000 rpm at 70 mph. There’s road noise and tire slap, but precise steering and a sense of serenity impress. Backroad romps induce an occasional bounce and obvious body roll, yet there is decent tactile feedback. Lane-keep assist steers the car toward the center of a marked lane. Turning this aid off is a chore. You must wind your way into a computer menu.

/>The Geneva Conventions should cover the cruel punishment that passes for Milwaukee County’s streets. The Jetta remains resolute over most flaws. Normal steering effort is low. I preferred the sport setting for wheel twirling. The longer Jetta didn’t corner as tightly as expected.

Stepping up to the SEL Premium means lots of doodads. A complete suite of driver assists includes blind-spot warning, lane keeping, radar cruise control and rear cross traffic alert with braking. The latter halted the car when backing it out of an election-day polling spot. The rearview camera indicated enough room, but the collision avoider won. The vehicle’s electronic parking brake intercedes, when you open the driver’s door while in gear. There’s an engine idle reducing start/stop scheme, which prevents the engine from restarting if you exit the vehicle.

The slick infotainment touchscreen is responsive. Radio tuning via a knob requires extra steps. You must tap “radio” first — not simple on a bumpy road. VW hides the panel dimmer and odometer reset in the infotainment menu. Automatic LED headlights turn on the high beams whenever possible. You can vary the LED ambient interior lighting color and brightness. Some areas are zoned for individual customization. LED lighting strips vary hues, if desired, to indicate drive mode. Red is sport.

VW claims the new Jetta offers remarkable value. The base model lists for less than $20,000. That and the extended warranty make the Jetta a bargain. Whether you should stuff the larger Jetta with the SEL Premium’s goodies is another matter. It lists for $27,795. Some good things come in large packages. This one’s miserly fuel consumption is an unexpected bonus. It grew on me.