Tribute to a mom: How Kathy Janiszewski and a ’72 Volkswagen helped inspire a lifelong hobby
By Tom Janiszewski 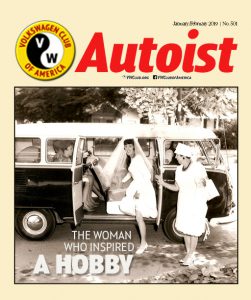 I’m not a parent, but one of the things I know that makes a good one is to introduce and expose kids to as many of the things that make life enjoyable. Whether it’s sports, cooking, cars or the arts, once the child shows an interest or talent in something, a great parent supports and encourages their son or daughter to enjoy whatever it may be to the fullest.

At minimum, it might foster a lifelong hobby. At best, it could be the foundation of a successful career. My mom and dad, Kathy and Jim Janiszewski, introduced me to Volkswagens in the early ’70s by simply buying a used 1972 Squareback to replace their Ford Falcon. There was no conscious decision to expose me to VWs, but they did.

Even at the young age of 4 or 5, I knew that the Squareback was different from most other cars. It had a friendly “face,” sans a mean-looking grille, and it sparked an interest in VWs that only grew into a full-on flame after my mom took me to a screening of “Herbie Rides Again.”

Mom was born and raised in Fillmore, Calif., and we drove from the Chicago suburbs to California twice in that Squareback with the sounds of John Denver coming over the single-speaker radio (Mom loved John Denver). Once there, we’d see my Uncle Albert’s yellow-over-apple green ’57 single-cab Transporter, which would later be the first Type 2 I ever drove as he let me take it for a spin around the Santa Paula airport. Uncle Albert, Mom’s older brother, 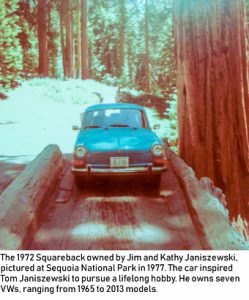 was a factory-trained Volkswagen mechanic in the ’60s, and VWs ran rampant in Mom’s family. My grandparents also had a Squareback, and I was sharp enough to notice theirs was older with its slightly more rounded nose and a chrome strip running along the lower lip of the trunk lid.

Because of all of these VWs in the family, I’d seek out Matchbox VWs whenever Mom offered to buy me a Hot Wheels or Matchbox car. I was thrilled to find a silver split-window Matchbox camper in a small hobby shop in Santa Paula, one that looked a lot like Uncle Albert’s truck. Back home, Mom was patient and asked every time

, and he pointed out that this way, I could take my time learning how to fix an old Beetle while relying on the new Fox to get to school and work. I bought the Fox, and just over a year later, I bought a ’65 Beetle. Both cars are in my garage today.

was always in the display case but always sold out. Turns out that by then, that model was discontinued, but she’d ask every time for me. 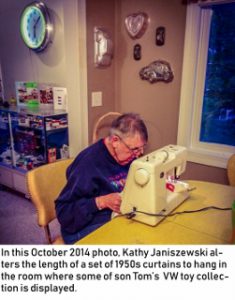 Moving into the early 1980s, my interest in Volkswagens really took hold. Mom took me to the 1983 Chicago Auto Show, where I got to sit in Rabbit Convertibles, Vanagons and other new models. As I approached driving age, I was focused on buying an old Beetle as my first car. After seeing the Volkswagen Fox’s debut at the 1987 auto show, my dad suggested I buy VW’s new entry-level car instead. I’d make the down payment, he’d co-sign a loan, and I’d make the payments. Then, on the side, I could save again to buy an old Beetle. He, nor I, had any mechanical experience

Between the time I ordered my Fox and its arrival six months later, I’d learned of a new Volkswagen club starting up in Rockford, Ill. — 80 miles from where we lived. Mom didn’t hesitate saying yes when I asked if she and Dad would drive up to Rockford with me to meet the rest of the folks who would become founding members of the Stateline Volks Folks (a local chapter of the VWCA).

In 1995, I added an orange ’74 Westfalia to my collection, and Mom lent her sewing talents by making new orange curtains for it. The ones in the Bus weren’t original, and they’d seen better days. When she was done, the bright orange ones made a huge difference in how the Bus looked. We added a custom touch to the interior with a pair of round bolster pillows she made using original Westy orange plaid fabric. I’d found an identical Bus at a junk yard and grabbed the upper bunk mattresses with pristine fabric. The front seats in my Bus were torn, so I was excited to have original fabric to use to give to the upholsterer. New seat piping was needed as well, and I made sure the upholsterer saved and returned to me the original orange plastic piping and all of the fabric scraps. Mom used the scrap fabric and segments of piping that hadn’t cracked to make pillows that look like they came with the Bus when new.

As I began my restoration of the ’65 Beetle, I decided to turn it into a faithful Herbie replica. I knew I wanted the graphics painted on the car, and I knew Volkswagen had a genuine Herbie on display at its Stiftung AutoMuseum in Wolfsburg. Mom and Dad were with me on a trip to Germany, and Mom brought her seamstress’ measuring tapes so we could calculate Herbie’s stripes and graphics and their placement. She held the tape while I took photos to record the measurements. Back home, she was incredibly tolerant of the borrowed spare hood in her living room as I was creating the templates that would go with the car to the paint shop.

My enthusiasm must have rubbed off onto my mom in the late ’90s, when New Beetle fever was sweeping the scene. She was at the dealer with me in 1997 as each of us put deposits down for one of the first batch. Mom’s arrived first, and they took delivery of the car on their 32nd wedding anniversary. Because I was willing to wait for the hard-to-find green model, mine was an early 1999.

By 2013, I’d racked up over 325,000 miles on my New Beetle, so I decided it was time to treat myself to a replacement. In July of that year, I took delivery of my Beetle Convertible TDI. As was the case with the New Beetle it was replacing and the ’88 Fox before it, Mom and Dad drove me to the dealership when it arrived.

Dad later came around to VW when he grew tired of how large Chrysler’s minivans had become. He traded his third consecutive minivan in for a 2012 Jetta SportWagen, and he still talks about how well the Jetta handles. My mom never would get to drive the Jetta due to her health.

At about the time they bought the Jetta, my oldest nephew, Johann, really took an interest in Germany. Mom suggested that he ask me if, when I went to Germany next, he could come along. I was thrilled. He saved for his own airfare, hotel and food to join my better half Joe and I as we traveled to Germany in June of 2017 to attend the vintage VW show in Hessisch-Oldendorf. A visit to Wolfsburg would follow, then we’d take a train to Munich once the car stuff was over.

A week before we were to leave for the trip, Mom wound up in the hospital due to internal bleeding that the doctors quickly fixed. Doctors had found a couple small tumors in her abdomen a few months before that they had been treating, and one of the tumors had ruptured. The surgeon advised that it’d take some time for her body to absorb the lost blood, so they wanted to keep her in the hospital. Mom insisted we take our trip as planned, so the three of us headed to Europe as she would have been upset if we didn’t.

A week into the trip, I awoke to my phone ringing at 5 a.m. on a Monday in our hotel, steps away from Wolfsburg Castle. Mom had died. She was 72.

We had been trying to get home since the day before when we heard her condition was worsening. British Airways’ customer service center was closed on Sundays, and they didn’t have service out of Hannover (the closest airport), so we wound up in Wolfsburg as we had originally planned, with the intent to call the airline Monday.

We were eventually booked on a Tuesday flight out of Hamburg. It was only Monday, and I needed distractions to get through the day, so we decided to see the sights and tour the VW plant as planned. As I walked through the same museum where Mom and I had measured Herbie’s stripes and numbers years before, it occurred to me that it was so typical of my mom to ensure I was where I was happiest if I couldn’t be with her in her final minutes; I was in Wolfsburg surrounded by friends who had also flown in from the U.S. for the Hessisch-Oldendorf show.

It’s been over a year since Mom died, but her involvement in this hobby of mine persists. Those orange Bus curtains she made 23 years ago are faded, and a couple small holes have appeared. They’ll never be replaced. It took a while, but I’ve reached a point where I can smile a little as I close them while camping on a warm summer night, thinking about how Mom supported me in this wonderful hobby. She was the best, and I miss her terribly. VWCA