The trouble began a long while ago, with a hydraulic valve lifter that would often bleed down overnight while our 1978 Westfalia Camper Bus, known as the Tortoise, slept in the garage. The result was a horrible hammering sound from the engine for the first 10 or 15 minutes of driving until the lifter pumped its oil reservoir full again.

The rebuilt engine had only 20,000 miles or so and had been given frequent oil and filter changes, so I wasn’t concerned about dirt, sludge or wear being the problem. The valve lifter itself had to be defective. The fix seemed simple – figure out which valve lifter was the culprit and replace it, an easy repair on a Type 4 engine. That’s exactly what I did, and all seemed well. 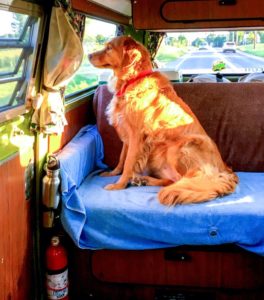 I’m not exactly sure how many months or miles passed by without incident, but one day I noticed a new ticking noise from the valvetrain on the same side of the engine as the new lifter. It was a soft sound, not nearly so severe as a lifter that had bled down, but it didn’t go away no matter how long the Bus was driven.

Although hydraulic valve lifters do not require periodic adjustments, they do have to be set when they are initially installed. This is to position the plunger inside the lifter near the center of its stroke, thus allowing it enough range of motion in either direction to self-adjust as needed. To set the valves, the adjustment screw is gently turned in until all mechanical lash is removed, and then turned in another 1½ to 2 turns to set the plunger in position. (Lash — the clearance between the tip of the rocker arm and valve stem tip — is a delicate balancing act between an engine’s durability and maximum power.)

Despite no requirement for periodic adjustments, it’s recommended that the lifter settings be checked occasionally to assure no unusual wear has occurred in the valve train. This requires keeping a record of the exact number of turns of the adjustment screw made during the initial setting and comparing that to the exact number of turns required to unscrew the adjuster until there is lash in the system again.

I checked all the lifter settings and found that the new lifter adjustment screw only required a little over one turn out until lash appeared. My initial setting was 1½ turns. This was a clear message from my engine that I missed, probably because I didn’t want to believe it. I rationalized that maybe I didn’t really pay careful attention to the number of turns of the screw when I did the initial setting. I reset all the lifters to 1¾ turns, and the noise went away. Problem solved!

A wonderful dog with a troubled past

Ella was a beautiful Golden Retriever mix that we adopted from the Cleveland-based rescue group Golden Retrievers In Need (GRIN) in April 2016. She was found as a stray and was said to be around 3 years old when we adopted her. Although it was clear that she was, at best, not properly socialized, or at worst, abused in her past life, she was a wonderful dog. We did our best to be sure we gave her love, gentleness and consistency. In our home, she blossomed. Ella and I especially connected in a “boy and his dog” sort of way, more than I had with any other dog I’ve owned.

Every day — sun, rain, snow, or shine — I loaded Ella into the car for a trip to one of our local parks for a long walk. She savored her walks and she LOVED car rides, especially those in the Tortoise. She would eagerly jump in through the sliding door and seat herself on the end of the rear bench, where she had a panoramic view of the world going by from the large side windows. She sat nearly motionless as we drove, gazing out the window, sometimes moving across the seat to look out the other side of the Bus. You can imagine the attention other motorists gave the combination of a shiny sage-green VW Bus with a beautiful Golden Retriever in the rear side window!

Around Thanksgiving of 2018, we noticed a small lump on Ella’s rear leg that was growing rapidly. It was diagnosed as cancerous, and she had surgery at a specialty veterinary hospital in early December to remove it. By that time, it was several inches long. The surgeon reported that the tumor was well contained and that no additional treatment was recommended. As with resetting Tortoise’s valve lifter adjustments, I thought the surgery would be the end of trouble. But it was not to be.

One evening in late December, Ella was lying on her back on the sofa next to me for a belly rub. While doing so, I was horrified to discover a new small lump in her groin area. At a New Year’s Eve appointment with the veterinarian, our beautiful Ella was diagnosed with lymphoma.

For dogs, lymphoma is a death sentence. Expensive weekly chemotherapy treatments over a period of several months can buy time, but in the end, the cancer always comes back. Ella hated the vet’s office. Despite her loving disposition with us, we had to muzzle her for veterinary appointments. Given the stress we had already put her through with the surgery and its recovery, not to mention the expense, we made the heartbreaking decision to forgo chemotherapy and treat the cancer with oral prednisone and a few injections of a cancer-inhibiting drug called Elspar. The prognosis was 3-6 months.

I committed myself to making sure that every day Ella had left was a good day. For the first few months, she seemed perfectly healthy and happy. As the days got warmer, sometimes we’d arrive at the park for a walk and she’d only wander a short distance before wanting to go back to the Bus. On those days, we’d spend time driving instead of walking, making short visits to two or three different parks for a short stroll at each. The months rolled on, and Ella rolled with them, defying the prognosis. Some days we fooled ourselves into thinking that after all she’d been through, somehow, she’d beat this thing. Of course, that was wishful thinking. 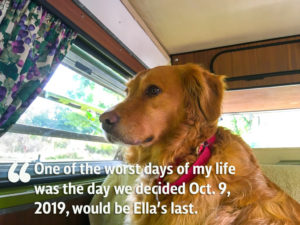 In early September, Ella and I were still driving to the parks daily for walks. It was on one of those trips that the valvetrain ticking noise began again. This time, I discovered that the original setting of 1¾ turns on the new lifter was completely gone. Without backing out the screw at all, there was lash in the system. Something was clearly amiss. I needed to remove that “new” lifter for an inspection.

It wouldn’t come out.

It slid a short distance down its bore and then hit a hard stop. This was not right. What was going on? I consulted the experts on the Itinerant Air-Cooled internet forum. Their diagnosis was that the valve lifter was being worn away by the camshaft lobe. That explained why the lifter adjustment had “lost” turns of the adjustment screw. As the lifter got shorter, its plunger shifted to keep the lash out of the system, until it could move no farther. In addition, the face of the lifter was being “mushroomed” as it wore away. This prevented it from being removed as it would not fit into its bore in the crankcase anymore. The only way to remove it now was to pull the engine and split open the crankcase.

My thoughts turned to Ella’s daily rides and walks. Did I need to take the Bus off the road immediately, or could I keep driving it? The consensus was that  the damage was done, and the engine had to be torn down. But, as long as it ran well, there was no reason to stop driving it – if I was prepared for the eventuality that the lifter would wear to the point that it could not open its valve and the engine would then be running on only three cylinders. I decided I would continue to drive it, but ONLY to transport Ella to and from our walks.

When should the suffering end?

We had frequent conversations with our veterinary oncologist regarding Ella’s lymphoma. As September progressed, we knew it would not be long until a very difficult decision would need to be made. The consistent advice we received was that we would forever regret waiting too long to end her suffering. After all, we knew where this was going.

In early October, her downhill slide began in earnest. My wife had been out of town for a few days, and when she returned home, she clearly saw how much Ella’s condition had degraded. One of the worst days of my life was the day we decided Oct. 9, 2019, would be Ella’s last.

It was a beautiful, warm, sunny fall day. I had booked a half day of vacation to spend the afternoon with Ella, visiting parks by VW Bus, of course. I opened the sliding door of the Tortoise. By then, Ella was hesitant to make the jump up to enter. I patted the floor, giving her the confidence to go for it, and she did, and then continued up onto the seat. I knew she would not walk far, so we drove to one of the more distant lake parks we liked, to have a long drive instead. She enjoyed the ride as always and spent a long time wandering the beach, enjoying the weather and the smells, without having to walk too far. All too soon, it was time to go home. The plan was for her to enjoy a last meal and have time with my wife until it was time for one last ride in the Tortoise.

The drive home from the park was uneventful, until we stopped at a traffic light about a mile from home. As we waited for the light to change, the happy sound of an idling air-cooled VW engine was replaced by the hammering of a failed valve lifter. A blip of the throttle confirmed that only three cylinders were now participating in the symphony of internal combustion. Luckily, with less than a mile to go at low speeds, we limped home successfully. But that would be all — the Tortoise would not be providing that final ride for Ella.

Bus is no spiritual entity … or is it?

As much as I love the Tortoise, and despite all the Herbie movies, I know it’s nothing more than a collection of mechanical parts performing a task. It’s a machine, not a sentient being, or a spiritual entity. But the timing of its failure seemed more than coincidental. Did it somehow “know” what the outcome of that last drive would be, and decide that it didn’t want to participate?

Many of its mechanical parts are now spread all over my basement workshop, awaiting reassembly as an engine after some additional replacement parts arrive. I’m looking forward to rebuilding the soul of the Tortoise with my own hands, with all the love and care I can impart, in loving memory of Ella.