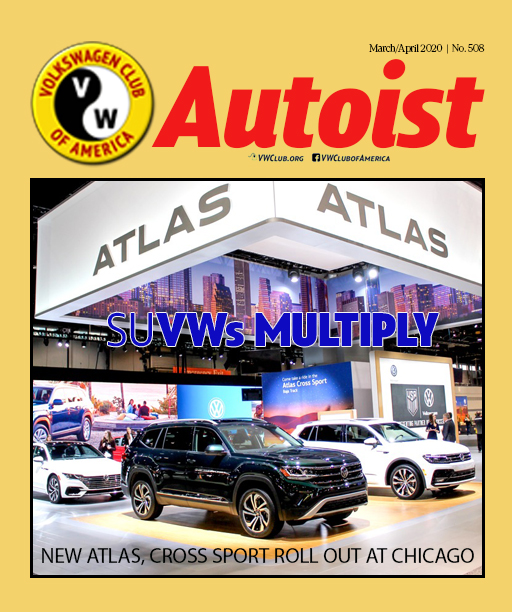 VW is motor-vating in a new direction

My parents took me to the Chicago Auto Show for the first time in 1983. They weren’t in the market for a new car. They took me simply because I wanted to go. At the time, they didn’t own a Volkswagen, so this was really the first time I got to look closely at and sit in new Rabbits (including convertible and Pickup models), Mk.1 Jettas, Sciroccos, Quantums, Vanagons and Campers.

It’s worth noting that each one of the models was also available in Germany, albeit with subtle differences to meet European equipment and safety requirements.

I already had an interest in the air-cooled models, but this was the beginning of my interest in contemporary models. I was in awe of not only the cars, but also of the elaborate displays highlighting vehicle features, their uniqueness, German flair, practicality and fun-to-drive qualities. I noticed early on how the display complemented the style and messaging of their sales literature, print ads and TV commercials. It took just one visit to the Chicago Auto Show, and I’ve gone every year since. 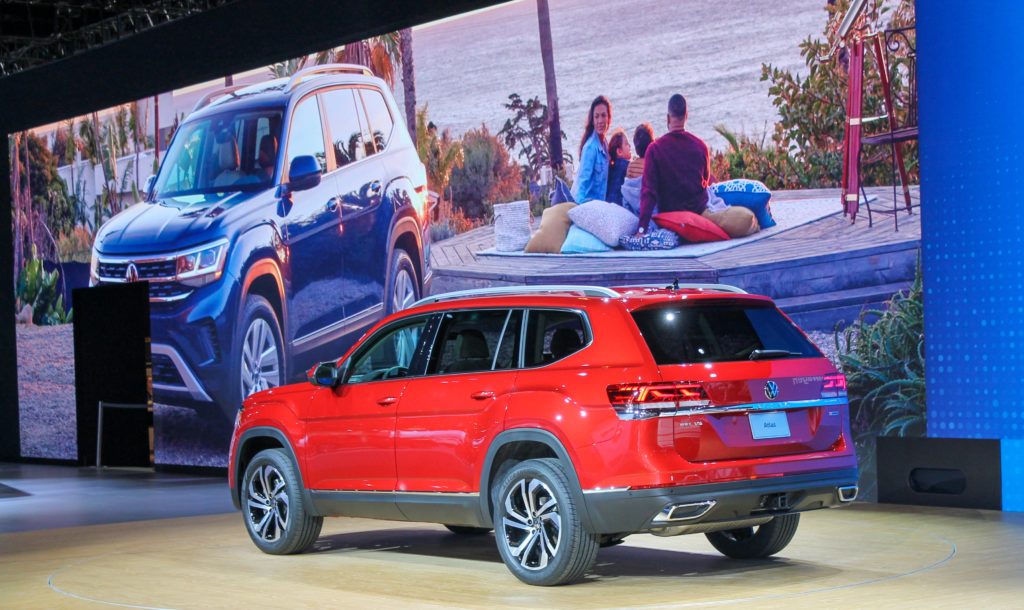 As the ’80s progressed, Rabbits gave way to Golfs, and subsequent generations of the Jetta rolled in. Vanagons disappeared and the EuroVan launched. I’d lust over the Rabbit Convertible, vowing to own a Tornado Red model (30-plus years later, I bought my 2013 Beetle Convertible). In ’87, my dad and I looked at the VW Fox making its debut in Chicago. Dad convinced me that it was a smart idea to buy a new Fox to rely on to get to and from work and school. I took delivery of my ’88 in late ’87, then saved again for the car I originally wanted to buy, an air-cooled Beetle. Both cars are still in my garage.

As the years passed, there was usually always something exciting to see at the VW display. To this day, nothing has surpassed the level of excitement when the New Beetle made its Chicago debut in 1998. Aside from the cars, interactive games offered prizes like VW T-shirts, hats and pins. You could wait in line as an injection-moulding machine slowly churned out plastic New Beetle pen holders (the machine actually made its debut in ’93 and churned out EuroVans). A slot car track featured VW Golfs that folks could race. There was always something fun to see or do.

The Chicago Auto Show is now the country’s largest auto show, and the 2020 show included more than 1 million square feet of exhibitor 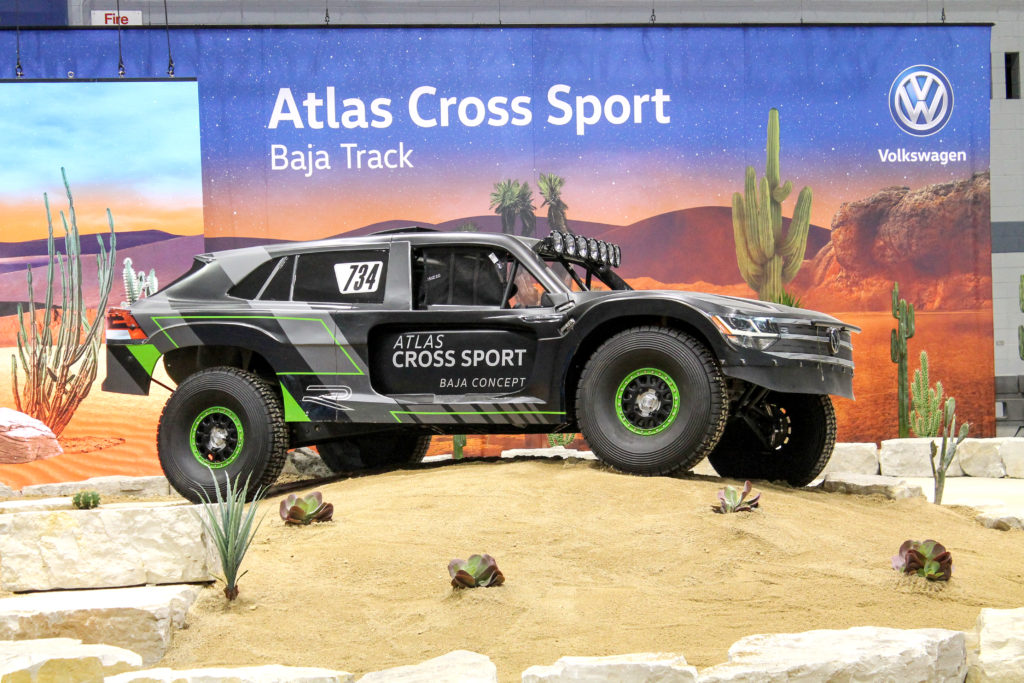 space with over 1,000 cars on display. This year, Volkswagen’s display was larger than ever at 22,000 square feet. Due to the absence of manufacturers like Mercedes, BMW, Mini and Volvo, those that remain enjoy larger and larger displays.

To augment the static car display, VW constructed an indoor Baja track using 384,000 pounds of rock and featured landscaping giving the track its off-road-look. Professional drivers provided 3-5 minute rides for more than 15,000 visitors to highlight the capabilities of the all-new, five-seater Atlas Cross Sport. Unveiled at a press event at the Chattanooga plant in October, this was the first time it was on display in Chicago. While the track wasn’t running during the media preview, a number of Cross Sports were on display on the track decked out in bright orange, blue and green body wraps. The colors were a welcome departure from the usual color palette cars come in these days.

Along with the Atlas Cross Sport, Volkswagen chose the Chicago show to unveil the refreshed 2021 Atlas to complement the growing number of SUVs in its lineup. Look elsewhere in this issue for coverage of the ’21 Atlas. As I stood back and took in the entire display and test track, it struck me: Unlike back in ’83 when every model on display was also available in Germany, half of our product range is unavailable in Europe. Jetta isn’t sold there at all. Our Passat is a completely different Passat from what’s sold there. Atlas/Atlas Cross Sport are built specifically for the US market.

This leaves just three models available on both continents: Tiguan, Golf/GTI and Arteon. Rumor has it, when the next iteration of the Golf arrives in the US, we’ll only get GTI and R versions (the most expensive models). The Arteon is an excellent car, but it’s the German-made coupe few asked for, and even fewer have bought. Meanwhile, even the mainstream auto media members scratch their heads over VW’s refusal to sell the California camper van here, or the Amarok pickup. Mercedes, incidentally, had a poptop weekender Metris van in its truck display.

The Beetle was conspicuously absent as 2019 was its last model year. This is also the first time in generations where no convertible was on display. There’s no convertible in the lineup nor on the horizon. The Golf SportWagen is gone, perhaps a victim of the elimination of the TDI engine, which seemed to be the wagon’s secret sauce that convinced some people to eschew an SUV for a high-mileage wagon.

Don’t get me wrong, the VWs on display are all fine cars and SUVs. It was all just so … status-quo. I didn’t see anything uniquely Volkswagen like the Beetle or a pop-top camper that’s just small enough to fit in a garage (that was over at Mercedes).

There was a time where at least a couple models in the lineup were unmistakably a Volkswagen, different from what the competition was selling, and something I could not wait to bring home. Volkswagen of America was founded on importing a little German car at a time when it was the polar opposite of what Americans were buying. The company used ground-breaking advertising to convince Americans that their odd little car might be the right car for them.

But I am still optimistic…

As I walked away from the 2020 display, I reminded myself that there is some new product coming that could inject more of that VW DNA into the product range. The production version of the I.D Buzz (please name it Microbus, VW) is on the horizon, and the new electric car platform in production now in Germany promises to offer a wide range of models to amp up the excitement and bring some uniqueness back to the US lineup.