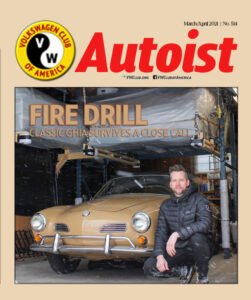 By Fred Ortlip
June 8, 2019, was a perfect Saturday for a car show in the Bridgeport neighborhood on the South Side of Chicago and another chance for longtime VW enthusiast John Godwin to show off the 1968 Karmann Ghia Convertible he’d owned for more than two decades.
Like a lot of VW enthusiasts, Godwin, 38, had eyed a classic Ghia as a youngster in the early 1990s in Little Rock, Arkansas, as he walked to school in the fifth grade. Fast-forward to high school and Godwin’s parents, Hank and Liza, had gifted him and his brother with their dream cars, a ’68 Ghia for John and a Jeep Wrangler for Jason — purchased in 1998 via a year-old website called eBay.

In those years leading up to that late-spring show, Godwin says he had phases where he focused on restoration, finding original parts, prioritizing preventive maintenance and spending long hours on weekends attending to it. Plus times where all he did was drive it.
But that low-key June show would be a watershed moment for the Ghia and its owner. On the way home, Godwin and his wife Anne stopped to visit a Chicago neighbor.
Shortly after they left, disaster struck.
The Godwins were startled by a loud noise from the rear of the car. Seconds later, “I saw what I thought were flame tips in the rear-view mirror and felt the heat on the back of my neck,” John said. “I knew immediately what was going on.”
With Anne’s memories of hearing about her mom’s Beetle catching fire, she exited quickly.
The next three or four minutes were frantic. Godwin emptied his fire extinguisher and seemed to have put out the blaze, but fuel had trickled under the engine and flames were still going. A video taken by a bystander shows Godwin opening the engine lid and being nearly engulfed by an 8-foot burst of flames as he quickly recoiled out of danger.

“I was in shock,” he recalled. “But I also realized very quickly I had a window of opportunity. So I was making fast decisions. I was not injured at all, not even singed eyebrows. Once my fire extinguisher went out with flames still underneath, I do recall having a sinking feeling that it may be lost. Right then is when I heard someone approaching, which was a complete stranger, handing me his extinguisher. I put the remaining flames out and knew immediately I dodged a bullet.”
In retrospect, he recalled having the decklid up at the car show that day and noticing that the braided line looked damp at the fuel pump. The fuel hoses were five years old at the time.
This observation combined with what the lines looked like after the fire — splayed like a cartoon-blown shotgun that was clogged — led me to conclude that it was a blown fuel line, near the fuel filter,” Godwin said. “The loud noise was probably the exploding filter. But I honestly don’t know.”

The next morning he confirmed that the damage was not anywhere near what most VW engine fires cause. He found melted wiring and corrosion from the extinguisher powder, an hours-long cleanup, as well as bubbled paint on the outside of the decklid, requiring body work. Then came the drawn-out claim dispute with his auto insurer.

Back to the original color
But Godwin, a VWCA member, had bigger things in mind for this Ghia, whose original color was Gobi Beige but repainted Porsche Black in 2001 after someone had backed into the car at a stoplight the year before. Repainting the car in its original color evolved into envisioning a full restoration. Over time, it became even more.
“So many things I’ve gone through,” he wrote in an email exchange. “So many things I’ve seen from the time spent with my dad in our carport in Arkansas the summer of 1998, where we laid the carpet and vinyl interior bits. I’ve been uncovering all this and seeing the DIY decisions we made that weekend, being thankful for it. I’ve been redoing what I didn’t know how to do more properly then (had an issue with firewall and sound deadening mats on the inside, falling down for year, letting in fumes, etc.). So again, calling this a restoration is not accurate. It’s more like a second go at a father-son restoration 23 years ago, as a result of a fire. Or a solid next step on our way to a full restoration down the road.”
His mother was also “integral in helping me budget and order parts during the original restoration back in 1998.”

All summed up by what he described as “longtime VW enthusiast has his first engine fire scare, the realities of insurance claims for classic cars and the fight to get it back on the road, parts supply disappointments, a renewed appreciation for those making quality restoration parts in a sea of poor-quality parts, lots of new friends on Instagram and an overall ‘leveling up’ of my maintenance efforts and upkeep of my small air- and water-cooled collection.”
Oh, yeah, the collection. Godwin is a graphic designer by trade, but having grown up in the advertising industry, he turned entrepreneur when he co-founded a logistics company called Schlep. This is how a 1971 VW Single Cab Transporter came into the picture.
“I needed a marketing tool for Schlep, so the Schlepmobile was born circa 2015 up until last fall when I sold it on the Samba to a gentleman in California,” Godwin said. In 2005, when he moved to California after college, he was driving a 2005 Jetta. Now, in addition to the Ghia, the collection is down to a 1982 Rabbit Pickup Diesel LX model that he picked up in December 2019.

‘The best stress relief’
“My hand skills help compensate for my late start in doing my own mechanical work,” Godwin said. “I do not come from a gearhead family. I was taught woodworking at an early age and have used hand skills in combination with my graphic design training to do as much of the mechanical work I can do on these cars myself. But I don’t hesitate to take it to a professional. My time working on VWs is sacred, usually solo and some of the best stress relief I have at my disposal. Add in the pandemic of 2020 and these VWs have been my saving grace, helping me stay focused and looking forward to tomorrow.”

Seeing the car in Gobi Beige again “has been all the reward I needed to keep going,” he added. “The concept for this build is based on the simple fact that I’m not ready to do a full body-off restoration. It needs new pans eventually. And I don’t have the budget to do carpet yet, since I have vowed to do German squareweave when I get it back to a brown color scheme in the interior.”
He’s looking at a process covering five to 10 years, using the black interior scheme left over from the previous restoration he did, mostly in 1999 and again in 2014, with black steel rims, chrome cap » only for an outlaw look, then beige exterior with all the original brightwork.
Since the fire, he’s moved the fuel filter away from the engine bay, bolting it to the transmission under the driver-side rear wheel well, and has installed BlazeCut, a fire suppression system. He plans to replace soft fuel lines on the anniversary of the fire every two years.

He found someone in California to make matching luggage racks for both the Ghia and Rabbit. In addition to fire prevention upgrades, he’s had some body work done and performed a transitional face lift for the interior. Not to mention having an eye for minutiae.
The Ghia has a few one-year only features, original to the car, such as the seat belt receiver and retracting clips, “which go great” with some other ivory-colored bits in the car.
“I’m carrying this through on other details like the shift knob, horn button and e-brake, eventually,” Godwin said. “Other than pops of ivory, the interior will be murdered out black ­­— that’s what the kids call it. Dash pad is not original, and the previous owner redid the wood face poorly. Once the dash face, dash pad and wooden top bow are replaced, I’ll have hit my stopping point for the Ghia.”
For now, at least.

Bugs Bunny and the Rabbit
Also deserving attention is the Ghia’s running mate, the mostly original Rabbit Pickup with 95,000 miles — about 6,500 by Godwin in a little more than a year of ownership.
“The previous owner airbrushed Bugs Bunny on the hood and sides,” Godwin said, “so I’m currently deciding on how to solve this.”

During the pandemic, he’s accumulated many sought after parts and accessories for VW’s first generation of water-cooled 1970s Rabbit/Golf models, admitting he’s “fallen very hard for MK1s and have spent a lot of time learning and reading about common issues, some of which I have, such as signs of water on the fuse box.”

The five-speed manual Rabbit Pickup “is probably the most fun I have ever had driving a car,” he added. “My wife and I drove it to Arkansas twice during lockdown, about 2,800 miles in two months.” The 2,200-pound Rabbit, carrying a newer non-turbo 1.9-liter diesel believed to be from a late 1990s VW Polo, made navigating the hills and switchbacks of the Ozarks “a blast,” he said. “I’ve never driven other (diesel) Rabbits, but this thing is indeed torquey. Add the sound of a diesel, and it feels pretty good.”

He added: “I have many plans for this pickup and have started the process of branding these two VWs together, and they will share some of the same aesthetic features, like siblings.”
Not to mention the unending tweaks on the Ghia, which will hit the 100,000-mile mark in the coming driving season — including 33,000 its caring owner has covered since 1998.
In February, he reported getting the decklid release cable working for the first time in 15 years. “Now waiting on pre-heater insulation kits to come from the UK. Couldn’t find any in the States. Next up is the dash. Then the bow. Then . . .”