Over her 96 years, Eva Kile experienced life at its fullest — often times behind the wheel of a Volkswagen 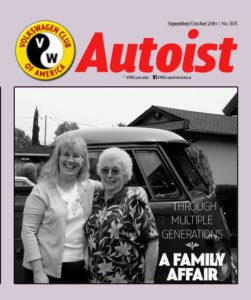 The year was 1957 and Dad decided he wanted an Oval Window Beetle. My younger brother, and the last of us four kids, was born in December of that same year, but the Beetle came home first, after a wait of more than 10 months to get it. My mom, Eva Kile, used to joke that they waited longer for the Beetle to arrive than they did for my brother!

At any rate, as far as I know, Mom never questioned Dad about why he wanted a tiny foreign car with the family growing by leaps and bounds. In typical Mom fashion, she prepared herself for the birth of another son and the arrival of a shiny black VW Beetle with red interior and an oval back window.

She would spend more than five decades driving a variety of VWs with aplomb — air- and water-cooled; gasoline and diesel powered; sedans; trucks; buses and a station wagon.

Mom already knew how to drive a manual (she’d driven her dad’s Model T at the age of 7!) and would ferry the two older kids to school when the weather was bad. At that time we lived near Boston, and anyone who has weathered a Boston winter can tell you it gets BAD. Mom told stories for years after those winters, telling anyone who would listen about how great that Beetle was in the snow: “Why, those drifts stopped everything else!

They’d see the snow and turn around, but not us. No, the Beetle would just push against the drift and plow right up onto it, and off we’d go. If the first try didn’t do it, I’d just back up and attack it again.” 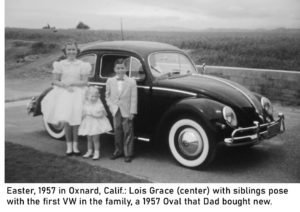 Mom was quickly becoming a Volkswagen fan. As the wife of a Navy man, the vehicles would become one of the centerpieces in her travels all over the country. The family settled in San Jose in 1961 and never left. Now she’s with Dad again after dying on July 23, the end of a life well lived over 96 years.

When the Navy moved us to California, that ’57 Bug rode on a railroad flatcar from Massachusetts. Sometime after, the Beetle was sold (for a 1961 NSU Sport Prinz) and Dad caught the VW bug again. He bought a 1959 Single Cab Transporter, to be dubbed Vernon, who resides with me today in all his restored glory.

Dad liked the rear engine of the Beetle he’d owned but wanted more room, and a truck would come in handy. Vernon was Dad’s truck, but Mom often drove him to do errands and such. One errand was schlepping tied bundles of newspapers to a recycling center about five miles away. My parents subscribed to two papers daily, so they piled up and the city would pay for their recycling. Mom and my brother stacked the bundles on Vernon’s flat bed, folded the gates back up, tied some ropes around it all and set out. 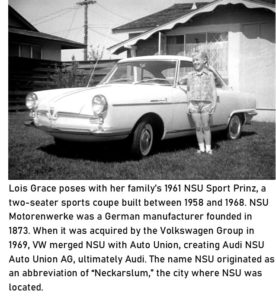 Imagine her face when they told her she’d had 2,200 pounds of newspapers in back! She told my dad later that she thought the pickup had “handled a little funny” on the drive there, and that “it felt like we’d been floating along the street, as if the front wheels weren’t on the ground.”

I sure wish we had a photo of that day, Mom in her sneakers piloting a levitating old Single Cab down the street.

That was just one of the many adventures (and birthdays) with Vernon: They were both born on Feb. 9. Her VW-driving life would persist for decades. A few years after Vernon arrived, her car became a 1968 Bay Window Bus, which was promptly christened “Barnabus.” It was cherry red with a white roof, and its one notable feature was that every time you shifted, the nose would shoot upward. She was quite a sight in our neighborhood in that Bus.

After Barnabus left us for greener pastures, Dad bought her a 1971 Datsun 240Z (for her birthday) to reward her for all of her patience and unflagging devotion to his weird car hobby. The Datsun was her pride and joy, and she’d reserve driving it on long trips or special occasions.

In her late 50s, her everyday car became a brand new 1981 VW Dasher diesel wagon, shiny Hershey-bar-brown with tan interior. She could now haul the dog to the vet without worrying about ruining the leather seats in the Z. She kept the car covered, in the garage, and it always looked like new.

The next year, 1982, Dad bought another new diesel VW, a tan Rabbit Pickup named Biff. Mom occasionally drove that also, usually at Christmas to bring home the tree. She even made memories with that truck, filling the empty tank with gasoline instead of diesel and never living it down with the rest of us. My mom normally didn’t DO boneheaded moves like that. And Dad in his wisdom, up in heaven, laughed at us all.

At age 90, Mom gave up her driver’s license, and we were happy we hadn’t had to confiscate her keys. She was still healthy but getting less able every day, and it was rapidly becoming clear that she would need to move into assisted living.

As we all made arrangements for that, Mom talked about selling her beloved 240Z. She didn’t want to keep the pristine car so long that no one would ever want it. It belonged with a collector, and that is where it ended up. It was a sad, somber day when the 240Z was sold and driven away by its new owner. My mother did not want to see it leave and went into the house as the appropriately named Zelda was backed out of the garage. I can only imagine how that must have felt.

Old VWs stay in the family

The other automotive members of her clan are in good homes as well. The Dasher is with our nephew Matt, my brother’s son, who has loved the car since he was a small kid.  The 1982 Rabbit Pickup, and Vernon, live with me, of course. It was only fitting that I keep both of the old VW trucks that my dad thought were so unique — each in their own way.

And Mom drove them all, at one point or another. She was (contrary to how I felt as a teenager) a remarkably adaptable person, adjusting to whatever vehicle was around for the errands she had that day. It always gave me the giggles seeing her behind the wheel of the ’68 Bus, urging us into the back and “make sure that door is LATCHED because I’m not moving until it is!” She had a fear of it sliding open and one of us falling out.

But amid all the VWs at our house at any one time, her favorite car was always the 240Z, and none of the rest of us were ever really allowed to drive it. Except Dad, of course.

Eva Jeanne Kile was a wonderful cook, an even better baker, and an accomplished seamstress who made clothes for four children and herself for many years. She met Dad, Richard Kile, when both were in the Navy, and they were married in 1944. After moves all over the country, and near Dad’s retirement as a lieutenant commander, a temporary move to Japan was canceled at the last minute.

She loved knitting and needlework of all kinds. She liked growing things and gardened up a storm, filling her one-third acre with trees and blooming beauties. She was a breast cancer survivor and fulfilled her dream in her elder years of teaching children by tutoring first- and second-graders in reading at local elementary schools.

She was a good sport when Dad wanted to go camping: The only thing she demanded was NOT to have to sleep on the ground. They bought travel trailers, and we spent many happy summers on the road visiting our two grandmas and seeing historic sites. When the first Volkswagen arrived in 1957, it marked the start of a multi-generational family affair.

Dad left us on July 24, 1991. As befitting a military wife, she had spent four years in assisted living and was doing well until she caught a cold she could not recover from. It seemed like she was waiting until the 24th of July to join Dad, but on the 23rd she went to sleep and did not wake up. I’d like to think Dad had come to get her a day early, and that when he did, he was driving a VW of some sort. It would be only fitting for such a lady. VWCA