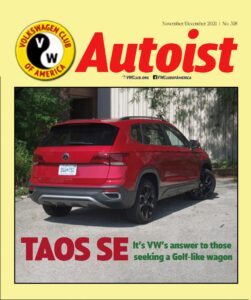 VW’s Taos slots below the compact American Tiguan in the brand’s lineup. Let’s triangulate by measuring other rides in what niche the Taos fits. It’s 9.3 inches shorter than the Tiguan, making it just a skosh shorter than Toyota’s RAV4, a mainstream compact SUV — Toyota, 180.9 inches vs. VW’s 175.8 inches. The wheelbase is 105.6 inches for the FWD VW but 104.7 on RAV4. As such, the Taos is larger overall than the original Tiguan. Oldtimers might notice it’s about the size of a postwar Jeepster. Meanwhile, the people-sitting area is roomier inside than the current Toyota RAV4. Taos’ cargo bay, alas, is smaller. Thus, the Taos’ dimensions are closer to compact than subcompact. It’s not pint-size like Hyundai’s Venue or Kona. 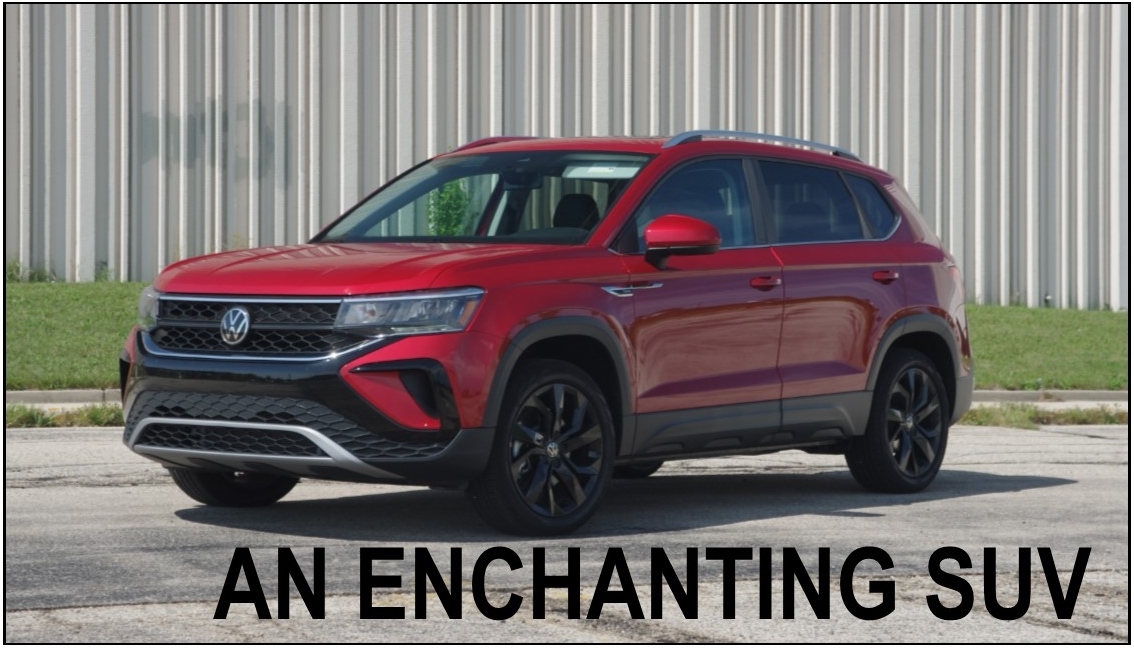 It’s a stretch, however, for VW to plaster the Taos moniker on the rump of its SUV and have us believe its machine has the panache of New Mexico’s artsy high desert enclave. But if one must live in a dot on VW’s atlas (or Atlas), near Hyundai Santa Fe and Tucson or Chevy’s Tahoe, why not borrow yet another Southwestern destination nameplate? Certainly less troublesome to the lips than Tiny Touareg II. 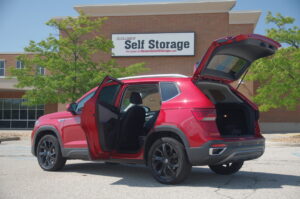 The FWD Taos’ virtues are decent fuel mileage and front/rear seating. You sit atop suede/mesh swathed thrones with contrasting stitching. This seems peachy as there’s plenty of legroom front and rear. Add a comfortable ride and tidy size and you’ve got VW’s answer of sorts for those seeking a Golf-like wagon. And the rear seatbacks easily fold to expand your hauling vista.

Aesthetically, the Taos body borrows heavily from VW’s gene pool. It’s got the “honey I’ve shrunk the Tiguan” look from the chiseled shoulder lines to the rear side-window kinks. Add generous window greenhouse and unlike, say, the Mazda CX-30, you’ve got good sightlines and modest blind spots. My tester included an array of sensors meant to aid maneuvers — better than bashing its bumpers, which likely don’t prevent expensive encounters.

While the Taos is likable, this Dub suffers from silly faux exterior embellishments. Honesty isn’t its forte. The bumpers have gray metal-like skid plates that aren’t, chrome exhaust trim that isn’t for exhaust and a black wedge on the A pillar meant to make the roofline look sleeker. Regardless, after a week of driving it, I focused on the Taos’ easy-going nature. 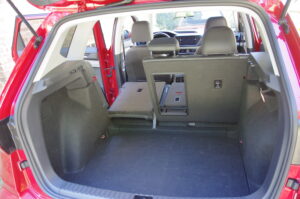 Inside, Taos’ plastic-shell dash pad and imitation blued-metal dashboard fascia scream cheap. It’s not a total loss. Under this you’ll find a soft touch ridge —much like a 1974 Karmann Ghia’s. VW doesn’t extend this softer side to the console — which caused my leg hairs to get staticy near the hard plastic.

Yet, VW wrapped the heated D-shaped steering wheel in leatherette, covered the A pillars in cloth, hemmed the headliner and lent an upscale click to the dashboard’s switchgear. VW incorporated the shifter’s lighted quadrant into the shift knob — likely a space saving move. The center front armrest is too small and too short for elbow support. The seats, however, embrace. The right front has manual backrest angle and height adjustments.

The easy-fold split rear seat has pass through, face vents and USB-C ports. Due to this chair’s upright stance, there’s adult-size room under the panoramic roof. When that seat is configured for cargo hauling, it rests higher than the load floor. Ahead, the “tuning” knob for the infotainment system often doesn’t tweak channels. Instead it scrolls through menus. You just press the touchscreen’s arrows to alter frequencies. But it’s possible if you split the satellite radio station menu to add a terrestrial radio tuning scale. On this, you can roll through the megacycles.

Press the start button and VW’s 158-hp 1.5-liter turbo EA211 engine lights up. This alloy-block mill, sort of an updated 1.4-liter used in the 2020 Jetta/Golf, has a slew of efficiency tricks. It’s as if VW’s powertrain specialists speed-shopped an automotive Kroger’s aisles for everything they could find to up mpg. The original Tiguan, FYI, had 200 hp.  So you can see the mission of mills here is different. 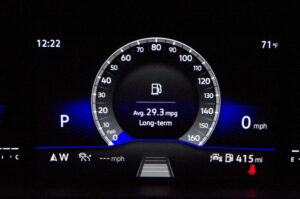 has an engine start/stop scheme to reduce idling emissions.

VW downspeeded the engine. Thus, it does most of its work between 1,000 rpm and 2000 rpm aided by a sudsy Aisin eight-speed automatic transmission. Just a light touch of the go pedal keeps you rolling along. Despite the low engine rpm treatment, engine thrumming is muted. Someone did their homework as the engine/tranny combo is polished, You don’t need the sport mode as a salve for a laboring engine. Urgency, however, isn’t its forte. There are moments such as climbing, say, Milwaukee’s Hoan Bridge, where a firm jab of the throttle gets a lazy one, potato, two potato, three potato rest until the engine wakes up. 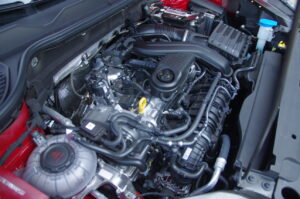 VW tuned this rig for comfort. Ingress and egress are easy — not too tall or too low. You’ll notice body roll. Noise is usually well suppressed, although some road textures intrude. Yet, I’d rate the cabin as perfect for the not-loud family driving as road chop is smothered and the powertrain doesn’t protest.

Steering is light but accurate. I’d prefer more steering effort off center. There’s some road sense, but you’ve got to twist the tiller with a light touch in order to know what’s up. Those who don’t want to wrestle with it will be satisfied, but you must opt for AWD to get a sport-mode steering setting plus an independent rear suspension. Some might find the light steering fun; you can dial too much arc. Frisky. Brakes come on effectively.

Driver info comes from VW’s eight-inch Digital Cockpit. You can tweak the display but it doesn’t let you simultaneously see a simulated tachometer and speedometer. The slow-to-boot MIB3 eight-inch infotainment touchscreen with voice control resides above the center console. My Android phone wirelessly paired with it via Bluetooth. But I found it difficult to find Android Auto with the phone plugged into the USB port. I usually saw the choice of Apple CarPlay or an iOS app. Looks like one must tell the device to forget previously paired devices — a hassle.

Also, during one trek, the system wouldn’t let me hear voice directions to a location it didn’t like. It seemed rather picky about routing to numbers not attached to houses. Sometimes you enter the address for a location’s parking lot rather than its front door. Just saying.

If you double punch the channel logo, you don’t get artist info. Instead, the unit summons a recording of that channel. This slip-time method was written into an early season of “The Good Wife,” in which  one character used a Buick’s radio to get a repeat for dramatic effect.

VW doesn’t coat the cargo bay’s metal bits with much of the optional ($395) King’s Red Metallic color coat. Items such as cargo hooks look like primer. There’s a spare tire and toolkit. The liftgate has only one interior pull down handle. Closing it requires muscles.

Front and rear traffic alert with pedestrian detection is standard as is a non-active blind spot monitor — a flashing icon on the side-view mirror. The active part is steering correction should you veer into trouble after signaling a lane change. You can override this but you’ll feel steering wheel vibration. Just press the end of the turn signal stalk to pull up the driver assist menu — the first option lets you turn off the lane assist by pressing the steering wheel’s OK button.

The Taos in its FWD form seems perfectly well suited to ramble the paved and unpaved roads in New Mexico or other environs. One wishes, however, that VW channeled some of the Audi’s Q3’s (size of the Euro-standard Tiguan) interior finery into the Taos. The price and equipment proposition is difficult for this reviewer to cipher. VW’s Taos is enchanting, offering comfort, space and fuel efficiency. It’s like reserving a room at the El Monte Sagrado luxury resort and not getting the whole enchilada. The view’s great, but you must pay extra for full driver-assist peace and tranquility.