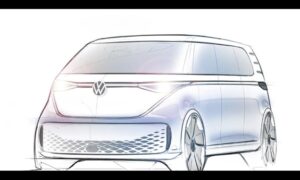 VWoA’s Scott Keogh says the Buzz is most anticipated VW model since the New Beetle. He claims the three-row ID. Buzz should arrive Stateside in late 2023 or early 2024.  No word yet on when you can order one.  So, you’ll have to sit on your hands and let VW work on its magic Bus or Buzz.

GM’s 90-year rule as America’s top-selling carmaker came to an end in 2022.  Toyota moved ahead of GM in U.S. sales.  And Hyundai/Kia advanced ahead of Honda taking fifth place in last year’s rocky sales race.  In luxury cars, Tesla zoomed past Lexus, Mercedes-Benz and Audi to claim second place, behind BMW.