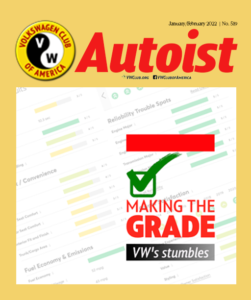 My brother Gary rejoined the VW scene after years of piloting or grooving a Pontiac Vibe (aka Toyota Matrix). The Vibe was mechanically and electrically nearly bulletproof — racking up hundreds of thousands of miles before its first unscheduled service — an AWOL water pump. As good as it was, the Vibe’s gutless engine (easy on fuel though) and cramped driver accommodations led Gary to seek a driver-focused alternative with a more powerful engine and bicycle-friendly rear hatch.

VW’s 2019 GTI with its generous People First Warranty fit the bill. So he pounced — got a new one at a nice price. Gary finds the car’s attitude a happy proposition. He can travel for hours and arrive at his destination with a grin on his face, no ringing in his ears and his old bones swaddled in Teutonic support. Plus, the turbocharged car’s diet (regular fuel) is just about as stingy as the wimpy Vibe — more power to the People’s Car. Another perk, the adjustable suspension tames unpaved roads. 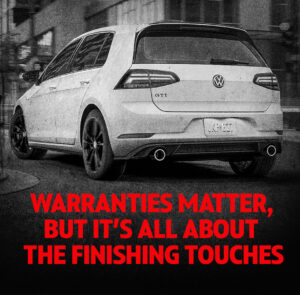 Owning the GTI, however, isn’t all bier (beer) and skittles. His red sled spent at least five weeks at the service department for various problems — some minor and others serious. These inconveniences were further exacerbated by his Nashville dealer. Gary says this store treated paying customers better than those with warranty matters. For example, the former got car washes, whereas those waiting for the People First treatment got dirty cars — greasy mechanic’s fingerprints and all.

Poor dealer communication, says Gary, is the worst thing about his VW experience. Of all the things that went wrong, it’s the dealer’s customer service that irked him the most. The dealer, for example, didn’t provide updates or even contact him after the car was fixed. Owning this GTI, therefore, is like being jilted by a lover. And the COVID-19 situation only added to his woes. Sometimes this dealer’s service department was poorly staffed.

Let’s start with the first of several firmware updates. His dealer kept the car overnight for the initial computer reflash — an unnecessary delay. In addition, the dealer didn’t offer a loaner. In contrast, a Florida dealer performed a later update promptly, directed my brother to the waiting area with drinks and snacks and prepped the car before returning it.

How to escalate the threat

The Tennessee dealer didn’t handle a more serious issue very well. The driver’s door-side air bag sensor or wiring went south. The dealer’s tech installed a new sensor after the vehicle spit out a trouble code. Then, just 5,000 miles later, the same issue recurred. This time my brother left the car at the dealer, but received neither a loaner nor updates. After VWoA in Auburn Hills stepped in, things changed. Gary finally got a new Jetta as a loaner (two weeks into the process) while VW replaced the left-door and steering-column wiring. Gary says he learned a key strategy — threaten to escalate the matter with VWoA. It changes the dealer’s attitude.

So when you see those red dots of shame in Consumer Reports’ reliability survey of late-model VWs, you now know what drives those low scores. While a warranty certainly provides peace of mind, it doesn’t mean your new-VW journey via its dealers will be peaceful.

Another Leppke brother rejoins the VW/Audi family. Mark, featured in the Autoist piece on dealer content management, picked up a late-model Audi TT. His Mazda Protege 5 rusted to pieces, so he went shopping for another ride. His search for used vehicles focused on an forlorn Audi TT, which passed inspections. And its hatchback accepted bikes — notice a running theme in Leppke vehicle choices? Your scribe, too, went Squareback and later Scirocco hatchback partly due to their bicycle ingest capabilities. Mark’s dealer, surprisingly, came to an attractive price. Apparently, there aren’t enough TT shoppers so despite the pandemic-related shortage of used vehicles, Mark found a keeper he could afford.

As reported in Automotive News, We Predict’s average 12–month in-service U.S. repair costs per vehicle data tells a different story than regional VW ads. VW’s TV spots say the brand has the lowest maintenance costs. We Predict’s table of service and warranty costs compiled from actual service records measured money spent by owners and manufacturers of vehicles from model years 2017-20 after 12 months on the road. Fuel, license fees, state inspections and collision damage were not included.

Consumer Reports’ Jake Fisher presented the consumer group’s 2021 Annual Vehicle Reliability Survey to a meeting of the Automotive Press Association in Detroit. VW landed 24th, that’s in the bottom tier. Lincoln (28th) was the worst. Other bottom-feeders in descending order include Ram, GMC, Mercedes-Benz, Genesis, Jeep (Gladiator truck with suspension death wobble) and Tesla. Those seeking the most reliable vehicles should start at Lexus, Mazda, Toyota (except some Corollas), Infiniti, Buick (except Enclave), Honda, Subaru (except Ascent), Acura and Nissan (avoid Rogue). 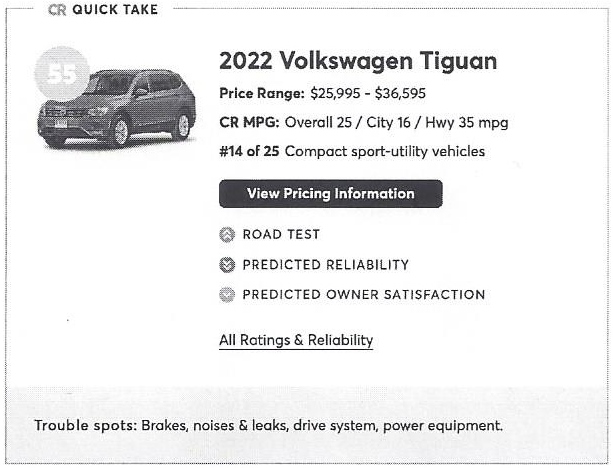 Fisher identified other problematic vehicles. Chevy and GMC 1500 trucks (Silverado, say) had engine problems from misfires to valve and pushrod damage. Chrysler’s Pacifica transmissions were problematic as was the hybrid’s powertrain. Some Kia/Hyundai vehicles had transmission troubles. Ford’s newest Explorer, known in the trades for their problematic gestation, was particularly bad; its more luxurious Lincoln Aviator variation scored worse.

In general, Japanese-brand vehicles fared better than European or domestic makes. CR’s Douglas Love says the publication uses a brand’s international headquarters rather than its site of production to determine its nationality. Fisher says several factors explain Japanese-brand reliability. The big one is they’re more conservative with the introduction of new technology. They don’t set out to dazzle with everything new like the Explorer. Mazda, for instance, hangs on to its six-speed automatic, rather than going with eight-plus speed versions or CVTs, which sidelined other makes. Boring, he says, is beneficial.

You might wonder why CR’s reliability survey matters. Love says it’s about making people more aware of the work they do and how it informs those buying or leasing new or used vehicles. Clearly, Fisher’s press op generates awareness of the firm’s annual auto issue. This is the 15th year of CR’s annual rollout of reliability ratings. But there’s more to this than selling people on the nonprofit’s mission. CR’s survey can help you avoid a costly mistake. Sometimes problematic cars, says Fisher, are never properly fixed. A good example is Ford’s Power Shift transmission found in its Focus and Fiesta cars. This dual-clutch gearbox proved bad from job one to job done. And these days with parts shortages and long waits for car repairs, there are even more good reasons to get a reliable car.

Fisher cited Buick as an example of a reliable domestic brand. But I wonder whether the Buick nameplate is actually a domestic. One could argue its Chinese HQ matters more to GM than its American one. According to Automotive News, Buick sold 39,299 vehicles through Q3 2021. Of these, only 7,623 were domestically produced. Thus, 31,674 of these Buicks came from China or Korea. That means 80 percent of today’s Buicks are imports. Fewer than 20 percent of the domestic-brand Buicks were assembled in the USA. Thus, I’d say this is a story about the secret rebirth of GM’s Daewoo — formerly the sad builder of the Leganza and Chevy Aveo, it’s now building better vehicles. Envision, the most reliable Buick, comes from China. Just saying. There was a time when CR separated the Buick Opel from the brand’s American-manufactured vehicles.

EVs get lots of media attention. And CR says 7,000 of its survey respondents drove them. The most reliable of that breed was Kia’s Niro and the worst were Teslas, although that former brand’s Model 3 was average.

High-end EVs had more troubles. And you thought an EV was less problematic than a gas-engine vehicle. Ford’s Mach E beat the odds with an unusually good showing. VW’s ID.4 (dubbed high-end) was worse than average. Bottom feeders include the Audi E-Tron and even worse certain Tesla models such as the Y and S riddled with body troubles and climate control issues such as the heat pump.

In contrast, hybrid vehicles fared well. This is likely due to Toyota’s strong showing. In contrast, Mercedes-Benz likely dived to the bottom due to complicated controls and lots of systems. And there’s the fantastic Corvette with a host of paint, trim, engine, tranny and other issues.