Consumer Reports, however, predicts the 2023 model-year Taos to be the least reliable motor vehicle based on its data. Let’s examine the NHTSA’s Taos file to better understand what plagues VW’s smallest SUV. On Aug. 3, 2021, VW issued a stop-sale order on its 2022 Taos 4Motion all-wheel drive SUV. VW told dealers that customers said Taos engines stalled unexpectedly when coming to a stop, though those engines could be restarted manually. At that moment, VW didn’t have a cure. Days later, VW informed the NHTSA of its safety-related recall of 5,092 U.S. Taos 4Motion models because of the stalling issue. 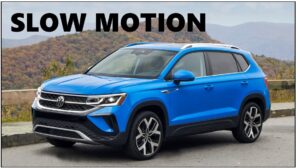 A deeper dig into NHTSA’s documents shows VW observed engine-stop failures on June 30, 2021, and conducted a technical analysis. A month later, VW de Mexico’s and VWAG’s Product Safety Committees discussed the problem. They issued a recall. In October 2022, VW reported it developed a repair — a software update to the engine control unit. By late December 2021, VW launched a recall campaign in the US market. VW said 100% of the 5,092 Taos 4Motion models built before early August 2021 were affected.

CR’s January 2022 Taos road test said the Taos 4Motion “has a surprisingly roomy cabin, but its powertrain has serious hiccups.” It found the “manic” SUV’s “obstreperous powertrain” a deal breaker; it “suffers from a big initial delay when trying to accelerate from a stop, followed by an abrupt burst of power.” Taos drivers felt vulnerable. CR did not, however, report engine stalling.

I reviewed the FWD Taos in 2021. It has a different transmission and rear suspension. I noticed sluggish engine power delivery when climbing Milwaukee’s elevated highways. This didn’t feel unsafe. The FWD Taos wasn’t recalled for engine stalling.

The NHTSA’s Taos file includes customer complaints. Dig into these and you’ll understand why some Taos owners aren’t happy campers. State of Illinois’ Oct. 26, 2022, letter, a Lemon Law action, tells the larger story: problematic vehicles are even more frustrating due to parts shortages, service delays and no loaner vehicles. A consumer bought a Taos in 2021 and then received the first recall notice: a faulty fuel line/fuel connector. There was a two-month delay to fix the fuel problem, and the vehicle was out of service for one month.

The second recall service action involved a control module’s software update. The owner received the notice in March 2022; it wasn’t serviced until late May. This was followed by a dash light warning — the vehicle was towed. The dealer noticed several duplicate engine misfire error codes but couldn’t verify the faults. The dealer told the driver to use different fuel. Next, the engine-control system malfunctioned, rendering the vehicle undrivable. No loaner was provided. Total miles driven: 6,700.

Many Taos drivers have complained about engine stalling, stopping or non-linear acceleration. It’s not clear at this date whether VW’s recalls or service campaigns have resolved these complaints. Drivers report the vehicle’s engine start/stop system (meant to reduce engine idling emissions) doesn’t work properly. Others say the engine hesitates; they see engine malfunction warnings. Often after a restart, they’re able to drive their vehicles to a VW dealer, but the technicians cannot diagnose the problem.

In addition to software updates, hardware upgrades include fuel tank valves. The October service bulletin prevents certain fault codes in the engine control module. It includes a performance improvement meant to address torque variations in 1,200-to-2,000 engine rev range with bad fuel, dissatisfaction with drive-off behavior and doesn’t include loaner coverage — although the latter might apply with another service campaign.

Because VW hasn’t recalled the Taos for bad drive-off behavior, its existing customers or future ones might not know about potential troubles and their proposed cures. It’s complicated. Some of VW’s service campaigns target 4Motion models, others all Jetta/Taos with the 1.5-liter turbocharged engine.

Because VW knew the Taos 4Motion had drivability problems in June 2021, issued a recall, and then service bulletins, VWoA should do the right thing: apologize and then launch a Taos vehicle-improvement campaign. This program should explain what went wrong and how VW will fix it.

Then, VW should compensate those affected by Taos problems, provide extended warranties and include loaner vehicles for those awaiting vehicle repairs. This isn’t radical. VW hatched a $5 million 1975 Rabbit/Scirocco/Dasher Quality Improvement Program in 1976 meant to solve a host of problems with its newly launched water-cooled vehicles magnified by parts shortages and labor shortages.

It’s not unusual for a newly launched vehicle such as the Taos to suffer from teething troubles. It should be usual for a carmaker to voluntarily notify its customers of quality problems and modify their defective vehicles.