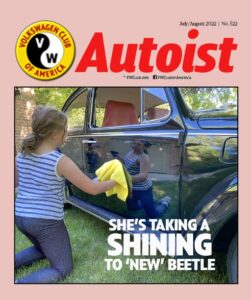 Andrew Opicka’s dream as a child growing up in Wisconsin was to someday own a Volkswagen Beetle. After all, his parents drove VWs — Beetles, Dashers and Golfs. And he got firsthand experience with German cars during summer travels to Europe to visit family members, where a friend of his grandfather owned a large travel company using Mercedes-Benz buses.

So, over the years, he developed a passion for German autos, and he’s personally maintained and restored several classic Mercedes-Benz and Porsche models. Since 1998, he’s been involved in the Mercedes-Benz Club of America, serving in executive posts. 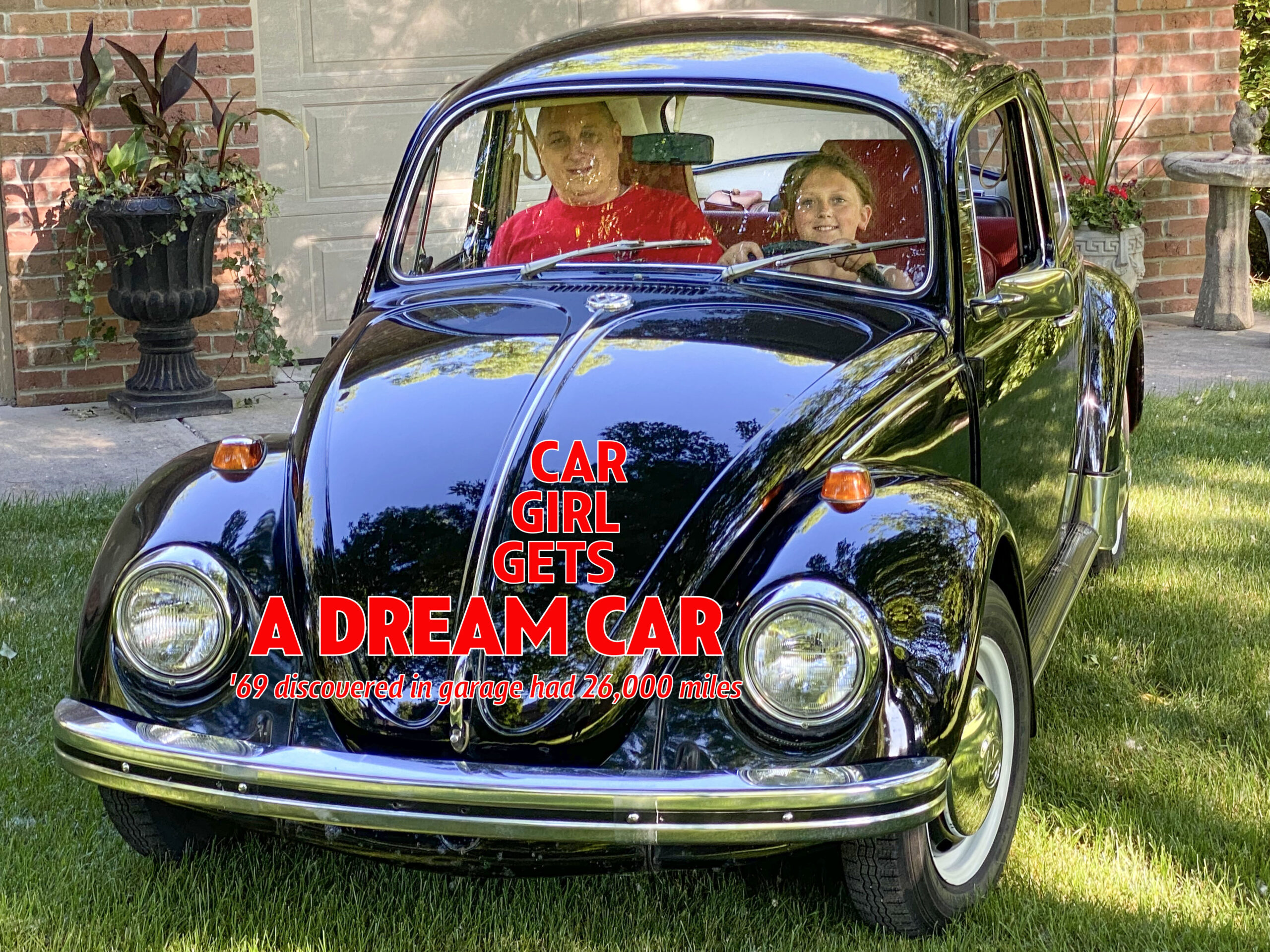 One thing was missing: Finding one of his childhood favorites, a 1971 Super Beetle. He thought he’d discovered one about five years ago but couldn’t persuade the owner to sell.

“My mother had a mid-’60s Beetle, and my father had a ’71 Super Beetle,” Andrew said. “He even got a free radio. And we still have the original sales receipt.” He says he’s always enjoyed the engineering superiority of the German car brands, mentioning Audi, VW, Mercedes-Benz and Porsche.

Fast-forward to late 2020 and the death of a longtime close friend (and VWCA member) who had a collection of low-mileage German and Japanese models. Andrew volunteered to help the family with the sale of the cars (he bought one of them, a Porsche 356, ending a personal 11-year search). A 1969 Beetle, among the cars stored in a basement apartment garage for more than 30 years, was the family’s favorite and last to sell. 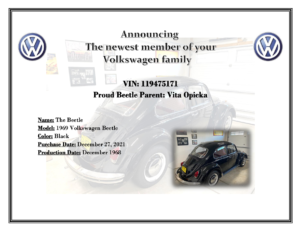 But Andrew was not aware of the VW until late December 2021, when he went to check out the car with the family. They originally wanted to fix it to drive locally, but the fuel tank was nearly full when stored and the location was not easily accessible. After an initial inspection, the family decided to sell it to Andrew to restore, with a pledge that he wouldn’t resell it. To him, it would be a gift to his daughter.

With the storage space lease expiring last New Year’s Eve, the all-original Beetle, with 26,000 miles, needed to be moved quickly. Andrew and friends towed the car out of the garage on Dec. 27 — 53 years and seven days after it came off the assembly line in Germany.

“We threaded the needle with the extraction as our cold snowy Wisconsin winters provided a 24-hour hiatus in ice and snow,” Andrew said. “The tires all held air and the brakes held for towing out of the basement ramp and onto the trailer.”

In a case of “like father, like daughter,” 10-year-old Vita — Andrew and wife Elise’s only child — was also thrilled about the Beetle, with original black paint and red seats. Andrew provided a note that the budding auto enthusiast wrote for the Autoist, reading read in part, “Me and my dad put in a lot of work to make it shine. I am so happy that it can start up so good. I dreamed of having a Volkswagen Beetle. The engine looks amazing. My dad is so happy too.”

Yes, Vita is Dad’s young wing-woman, showing interest at an early age in the mechanical nature of how things work.

“My daughter loves to attend the vintage races at Elkhart Lake, which is not too far south of our home,” Andrew said. With Dad’s hands-on guidance, “happily, she’s turning into a gearhead/petrolhead already and dreams of restoring an all-original VW Type 2 Campervan,” he said. “It’s very rewarding to share my knowledge of mechanical repair and restoration with younger people.”

She helped a lot with the brake repair, rebuilding and adjusting, along with a significant amount of cleaning and polishing, he said.

Father and daughter spent the next several weeks rebuilding the brakes, fuel system, carburetor and performing minor electrical work, making the car roadworthy in late February. An updated brake master cylinder was installed, and the original rubber mat was replaced because it was too brittle to be removed for the required brake line replacement.

In early June, Andrew replaced the muffler after finding it difficult to get the correct NOS version. “The old muffler was not original and was well rusted out — the only troubled area on the car,” he said.

While Vita (pronounced “veeta”) is not helping Dad, she enjoys documenting various automobile marques in school writing projects and on the Kids YouTube Channel, which debuted during the pandemic. Andrew says she enjoys making how-to videos and reviews, particularly involving automotive events and classic cars.

Her YouTube channel is called Vita’s World. A recent video described how to replace the Beetle’s drive belt. Late in the process, she advises: “According to the shims, we should have 15 to 20 millimeters of play.” Beetle washing tips are another subject.

At the Beer Brats and Bathtubs event at Road America last year, Vita mingled cheerfully with a gaggle of pristine Porsche 356 models, and she also provides commentary on Dad’s 1969 Mercedes-Benz 280S. “Look at how pretty this car is,” she intones from the passenger seat, a spot-on assessment.

And if you ever wanted to make an apple out of Play-Doh or learn how to Rollerblade, her channel provides the how-to. Like many YouTubers, she urges viewers to hit that “like” icon, hoping to attain 10,000 of them, which would generate token monthly revenue from YouTube ads. Future gas money, maybe, because though Vita is still too young to drive, she’s the rightful owner of the Beetle. Andrew said: “It was my dream to own my favorite childhood automobile and couldn’t be happier to be able to maintain it with her as her first.”

Andrew says he wants to honor his late friend and family by teaching Vita about automobile history and engineering excellence. He summed her up proudly: “I am a proud father of a true car girl.” VWCA