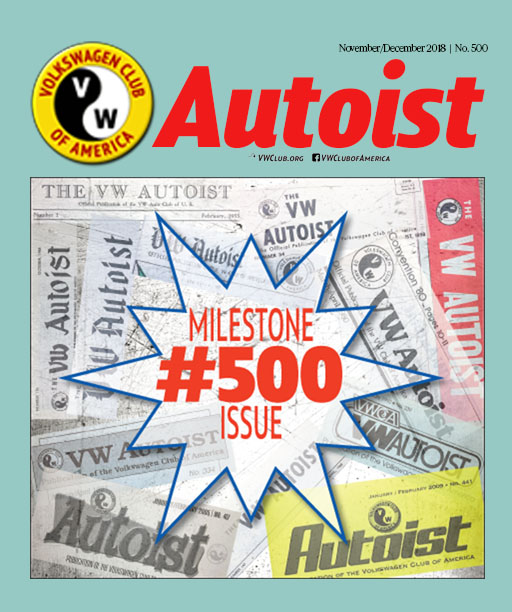 The average cost of a new house was nearly $11,000 — just $87 a month for renters. Gasoline was 23 cents a gallon, and seven out of 10 families now owned a car. The average wage was about $80 a week. The first McDonald’s restaurant opened and so did Disneyland. Rosa Parks, an African-American bus passenger, was arrested after refusing to give up her seat to a white passenger in Montgomery, Ala.

In New York City and the New Jersey suburbs, a quirky German subcompact sold in America for only seven years was inspiring a group of enthusiasts to form a club aimed at connecting other enthusiasts from around the country.

The year, 1955. The car, Volkswagen. The publication they used to spread the word: The VW Autoist.

More than six decades later, the publication that pledged to help members enjoy their VW (and later Audi) to the fullest has reached its 500th edition.

As originally named, the VW Auto Club of U.S. produced its first Autoist issue in February 1955, a single, shiny

9 x 12-inch sheet folded sideways, in effect a neat four-page issue. The editor was also the club’s founder, Sterling Parks Jr., a lawyer who worked for a real estate title insurance company. The Autoist described its mission as “An independent national membership society interested in the air-cooled Volkswagen, product of Western Germany.” It listed a post office box in the Bronx’s Fordham Station.

With the growing German automaker originally setting up its U.S. headquarters in New York City (later moving to Englewood Cliffs, N.J., just across the Hudson River), club organizers recognized a conduit to other VW owners.

As the Autoist would later report: “On a chilly February evening in 1955, seven Volkswagen owners and enthusiasts gathered around a table. Out of that modest beginning came one of the biggest and fastest-growing clubs in the world—the Volkswagen Club of America.

“The seven men came from all walks of life; they included a stone-mason, a lawyer, an engineer, a college student, a magazine writer, an automobile mechanic and an airport dispatcher. But they had one thing in common: a desire to form a club of VW owners which would make it possible for them to exchange information and tips, and share their enthusiasm for the world’s greatest automobile.”

Autoist No. 1 reported: “We promised a certain dealer that we would form a club, and he promised to promote recruiting. Other dealers have since promised to promote recruiting. We outlined our plan for the club to the principal representative in the U.S. of Volkswagenwerk at their U.S. offices, 720 Fifth Ave., New York. We also discussed the proposed VW Auto Club of U.S. with Victor Elmaleh of World Wide Automobiles Corp., VW distributors (importers) for New York and certain other states, at their offices.”

In 1954, Elmaleh, a Moroccan-born U.S. citizen and real estate developer, was among the first to import Volkswagens, a tough sell because the cars were an outlier among America’s automotive behemoths and produced in a country America was at war with just a decade earlier. The New York Times reported in Elmaleh’s obituary in 2014 that he enlisted bicycle shops and used-car lots to sell the cars, to make up for the reluctance of established dealers.

There’s a lot more to this tale and you’ll be fascinated by the twists and turns ahead – for both the Autoist and the Club itself. Click here for the rest of the story.