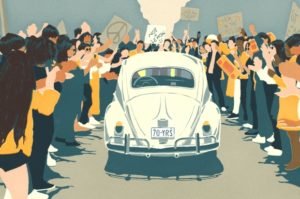 VW’s ad agency produced “The Last Mile” seen during ABC’s Rockin’ Eve broadcast.  This animated film traces the story of a boy whose major life events were influenced by an air-cooled Beetle.  It incorporates pop culture references including a cameo by Andy Warhol.  The soundtrack is Pro Musica Youth Chorus’ version of “Let It Be.”  As the Bug ends its painterly journey, it morphs into the face of VW’s electric ID vehicle with its the brand’s new signature illuminated face.

VW and Audi Post U.S. Sales Increases for 2019; VW Says Goodbye to the Bug with a Film