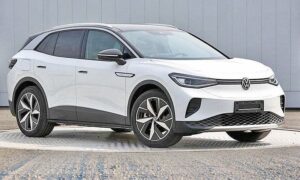 Five years ago, VW admitted it skirted diesel emissions standards. This scandal caused an abrupt shift in the firm’s direction. One new path is the series production of high-volume, affordable EVs based on the MEB platform Americans saw at the 2017 Detroit auto show, as the I.D. Buzz concept vehicle.

VW says it began production of the MEB-based ID.4 compact SUV at its Zwickau factory during August 2020. Expect this vehicle’s worldwide premiere later this month. It’s the first MEB-platform machine headed to the USA.

The ID.4 sales program is as radical as the vehicle is for VW. Americans can preorder the SUV via a centralized online reservation system. You deposit $100 for a place in line. Later, customers head toward most VW dealers where they make an additional $400 deposit. Both deposits are refundable.

Buyers can monitor order status, build and the delivery process. VWoA expects tight supply for the new electrified VW, as only one German plant builds MEB vehicles. Eventually VW’s Chattanooga plant will produce it, too.

VW’s Scott Keogh expects the price, after available credits, to be a tick more than $30,000. VW will subsidize 85% of dealer cost for EV infrastructure upgrades. Estimated range is more than 300 miles.