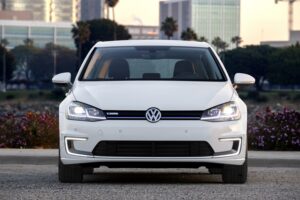 Dec. 24, 2020:  The e-Golf’s chapter as VW’s first major move into battery electric vehicles ended last month.  The final one built rolled off the assembly line just before Christmas.  Since 2014, VW built 145,561 of them at its Dresden factory.  The e-Golf, despite its modest range, proved an EV favorite in Europe.

Canceling the e-Golf is a gift of sorts.  It lets VW retool the Dresden facility to build its MEB long-range BEVs such as the ID.3