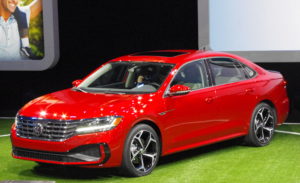 VW’s Ralf Brandstatter says VW will discontinue the North American midsize Passat sedan—perhaps in 2023.  This Tennessee-built vehicle is larger and rides atop a different platform than the European Passat.  Expect the Euro version—popular as a company car—to get a makeover in 2023.  Its production shifts from Germany to its Skoda subsidiary’s Czech plant.

VW had big plans for its North American-built Passat.  It was larger and less expensive than the imported model it replaced.  VW claims the Passat’s passing opens production capacity for Atlas models and its ID.4 battery-electric vehicle.

VW’s ID.3 hatchback was Europe’s best-selling BEV (10,475 units) during October 2020.  It surged past Tesla’s Model 3.  Experts say it has robust business and fleet sales.  It was Norway’s best selling vehicle for October (2,475) with 19.1% of the market.  The ID.3’s initial production had infotainment glitches. VW produced a batch of vehicles requiring software updates for head-up displays, Android Auto and Apple CarPlay.

VW says it’s delaying the American retail rollout of its ID.4 SUV until March 2021.  It shifted production toward Europe where it faces fines for not hitting emissions targets says Automotive News.