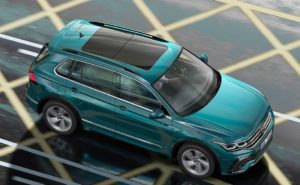 A European court says EU consumers may sue VW in their local districts for damages caused by VW cheating on diesel emissions.

Meanwhile, VW announced a freshened Tiguan.  Expect the 2022 model-year long-wheelbase Tiguan to arrive in the States with a nose job and new interior amenities.  You’ll see a steering wheel with touch-island controls, digital cockpit instrumentation and LED headlights.  Travel Assist, which monitors items such as posted speed limits, is one of several new safety or driver-assist features.  The engine and transmission for America carries over unchanged.