New country for an old Passat? 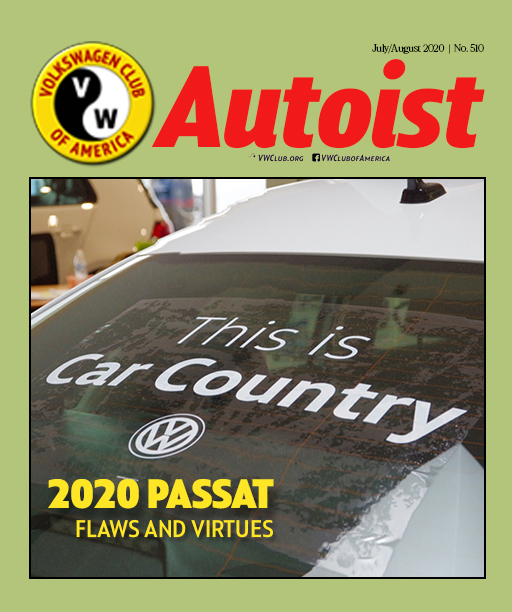 American model makes sense … but with an asterisk

VW’s New World Passat isn’t a Coen-style thriller. Despite its refresh for 2020, it doesn’t breathe new life into the mainstream sedan genre. VW originally designed this sedan with a simple mission: make it as American as apple strudel. Now, it rolls into this century’s second decade with the same PQ46 platform as the 2012 model. It differs from the current German version, which underpins the smart but slow-selling Arteon.

Despite its now suitable for carbon-dating structure, the concept of the American Passat still makes sense. It’s spacious — oodles of rear-seat legroom — and includes contemporary safety gear. There’s some stowage alongside the under-the-floor spare tire. This, as with many other parts of our Passat, isn’t nicely trimmed.

And that’s the overall American Passat story. It’s got a smorgasbord of features, but it’s not a tasty dish. During the Euro Passat’s American glory days, the car offered Audi-like luxury at a mainstream price. Check out Hyundai’s 2020 Sonata Limited. You’ll find all the Audi goodies there. And it’s built in the USA with American-sourced parts. In contrast, VW’s “car country,” from Tennessee, is more Wal-Mart-like rollback than forward Teutonic livery.

It’s got warts, too. Assembly gaffs include wayward C pillar trim, a skewed steering column cover and an unhemmed rear-edge headliner. Body sealant near the trunk looks like something from a kindergarten art show — after they forgot the Ritalin. The chassis, however, has good bones: struts up front and an independent rear suspension.

Despite its flaws, the 2020 Passat has virtues. Under the hood, an agreeable 2.0-liter 174-hp turbocharged four-cylinder mill provides modest oomph. It’s tweaked for fuel efficiency rather than jet-like propulsion. Torque is up a bit to 206 lb.-ft., which wrenches a six-speed automatic transmission. The latter has a new torque converter. These updates produce adequate thrust at low engine revs. There’s some grittiness at lower speeds, throttle tip-in requires a light foot, and the engine occasionally thrums. Happily, it’s not a thrum major.

It’s got moxie, enough to motor on Milwaukee’s interstate with its valleys and high-rise bridges without annoying gear shuffling. In fact, this power plant is somnambulant, turns a sub-2,000 rpm at 70 mph. And the Passat relieves gas pains. I averaged a thrifty 33 mpg. The EPA figures are 23 mpg city, 34 highway and 27 combined.

Our Passat isn’t an autobahn burner. Yet, it cruises effortlessly. Ride quality is a mix: the good, bad and homely. The Giti tires — a Singapore firm makes them in the States — clop a lot and at 70 mph on lumpy Wisconsin interstates. This unsettles an otherwise tranquil cabin. Body motions seem underdamped — like an inflatable bounce house.

Thus, you’d expect the Passat to keel over on its door handles when things get twisty. You’d be wrong. Steering is light, accurate, centers well and has some road sense. Effort doesn’t build as much as I’d like when cornering. Yet, its behavior on my asphalt backroad romp smothered it — both in ride comfort and vehicle control. It even absorbed multiple railroad tracks without loco commotion. The frisky car rotates nicely. I didn’t notice the tail wag Consumer Reports found. But it needs a firmer brake pedal. Between you and the hydraulic binders, you’ll find marshmallows.

VW loaded my SEL tester with au courant driver assists and a self-parking system. Radar-type cruise control, for example, manages vehicle-to-vehicle distance. It’s tied to a forward collision abatement system with autonomous braking. The instrument cluster’s info screen flashes a bright graphic when it targets a too-close vehicle ahead. This graphic with distance lines presents a Golf-like vehicle’s rear for gauging the gap ahead. Another setting lets you view both forward and side assist monitoring. While useful, the monochrome graphics lack contrast.

You can cancel the lane-keeping function. And you will; it gets flummoxed when you travel over perpendicular stripes, say, when merging southbound through a northbound divided highway. The process is awkward: one, press the steering wheel’s right toggle switch to select the correct info screen menu; two, press OK. There’s a green icon that informs you when the system is ready. Instrument brightness is simple to adjust.

Inside, the Passat’s slim pillars and generous side windows aid sightlines. Both front seats support equal rights. Each forward sport comfort seat has eight-way power controls — a pleasure. And these leather-clad thrones supply tall-person thigh support. The left front seat doesn’t fully recline, however. The new soft-material rectangular-fascia dashboard has film noir-inspired vent slats. They extend from the instrument binnacle to the right door. A skimpy 6.3-inch infotainment screen with small volume and tuning knobs resides under these vents — not great for old eyes. The Fender sound system stages music well but there’s no CD player; the subwoofer cuts trunk height. VW offers one front USB port and a 12-volt socket — each lit by an overhead lamp. The rear has face vents and two USB charging ports. And surprise, both front seat backs have pockets.

The decor casts the star parts above, unimpressive bits below. Some items are neatly stitched with contrasting threads too. While soft-touch upper pieces seem fine, elsewhere mediocre grained hard plastics and faux wood panels rule. A matte gray panel surrounds the illuminated shift lever quadrant. Many cubbies aren’t lined. The dashboard’s under side is tidy. Automatic climate control and heated seats (front and rear) coped with a Lake Michigan pneumonic front — a sudden drop in temperature from 70 to 42 in two hours. And the wipers automatically adjust to rain intensity.

Outside, the Passat’s wrapper sports new wrinkles. Its Jetta-like rhinoplasty looks nothing like a German VW with their slit-like grilles punctuated by roundel badges. VW says the Passat has fastback styling. Dream on. This effect is not due to a sleeker roofline. Instead, VW reshaped the small windows aft the rear doors — no more kinks. Inside, the old kink-window frames are still there — penny pinching. Regardless, the look is racier. The flanks don what VW calls tornado lines. These strake-like sculptures have clearly defined upper and lower indentations similar to the Arteon’s. They also echo the Honda Accord. Another Accord-like embellishment is the thick chrome bar atop the grille.

VW asks $32,015 for the 2020 Passat SEL. I’d say the price and the car’s accommodating interior isn’t enough. If it were a mashup of Coen brothers’ titles, you might call the Passat the old car for a country that isn’t there. VWCA