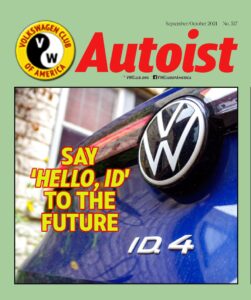 It’s not a car, it’s a driving device

VW’s ID.4 is more than a toe-test of the brand’s ability to innovate in the battery electric vehicle wading pool. As such, VW is putting all its metaphorical bodily resources into a BEV tsunami. This long-range vehicle lets Americans join the impending wave in an SUV-like package. And VW says it will build them here, too. This machine differs from some long-range EVs (Chevy’s Bolt); it’s larger. VW doesn’t promise unbridled or ludicrous acceleration either; it’s adequate. 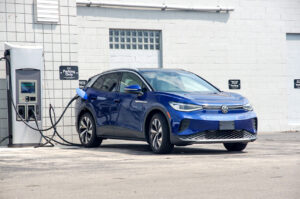 VW’s BEV combines rear-motor propulsion — a one-time VW trait — with the software and hardware engineered to charge batteries and supply current to that motor. Plus, there’s an entire suite of newfangled gadgetry. Just say, “Hello ID, my feet are too hot” and the car responds by saying it’s cooling the floor. Ask it to tell you a joke and it replies, “The developers had difficulties with the safety belts until it clicked.” Groan. Otherwise, the ID isn’t a joke, although its driver interface is befuddling.

Will you get cold feet? 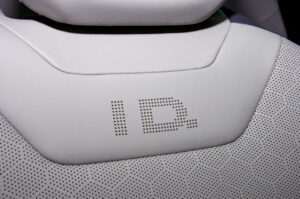 If you ask. The ID converses in various ways: One, there’s the dashboard voice; two, an LED strip at the windshield’s base responds mimicking an oscilloscope — echoes of Ernie Kovacs’ visual/aural trick; three, vehicle proximity sensors notice you and then pre-chill the interior before you enter it; and four, and most importantly, the machine’s architecture says volumes about how VW sees future automobility — one where electrical brawn and brains do the driving for you.

Before proceeding, let’s examine this vehicle’s mission: VW’s brass says this car is for the millions, not millionaires. Really? Volume sales to everyday people aren’t here yet. Sales of the  ID.4 are not faring well in VW’s biggest market — China, so VW plans a marketing/distribution shift. In Europe, reports say sales are promising. In the States, the ID.4 trails Tesla and Ford’s Mach-E with a modest take rate — 6,230 year-to-date as of August. The tested ID.4 Pro S (Statement) with Gradient Package lists for $47,190, which to my wallet seems closer to the 1-percenters than the rest of us. 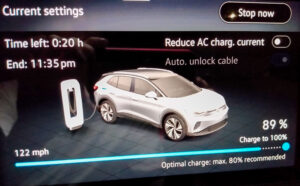 Plus, to get the most out of this vehicle, you’ll need a faster Level 2 charging system at home (240 volts), because the standard Level 1 charger (120 volts) takes what seems like an eternity. I drove the ID.4 about 80 miles, depleting the battery to a predicted 160-mile range. Then, I plugged in its portable Level 1 charger. The vehicle’s charging screen estimated 11/2 days to refill the 82 kWh battery to an its maximum charge of roughly 240 miles.

Thus, those going electric are buying more than a car; they’re tapping into a nascent infrastructure. It’s not cheap. HomeGuide.com estimates that installing a Level 2 station costs an average of $750 to $2,600, including labor, but financial incentives may be available.

Still, the Mosel, Germany-built compact crossover (SUV), which has 46% Chinese parts content (Germany is 39%), is the kind of transport appliance many shoppers want: a family friendly mid-height station wagon. Let’s compare the ID with a 1959 Rambler Cross Country — a sensible, but flawed trend-setting wagon. The ID’s wheelbase is 0.9 inches longer, at 108.9. Width is 0.7 inches wider, at 72.9. Length is about 13 inches shorter, at 180.5 inches. Height is nearly 6 inches taller. In sum, it shares the same road space as Toyota’s popular Rambler-size people mover: the RAV4.

Inside, the ID is a people-friendly spacious wonder. The rear electric motor rides somewhat ahead of the rear wheels. Due to its nearly flat floor, lack of drive-train intrusion, plus theater-style chair-like higher back seat, the ID offers lebensraum for four or maybe five adults under its panoramic glass roof. Cargo area is generous in length, but height is limited as the rear hatch slopes downward from the C pillars. It’s easy to reconfigure into a cargo hauler; the split-fold aft seatback offers plenty of drop-down space. 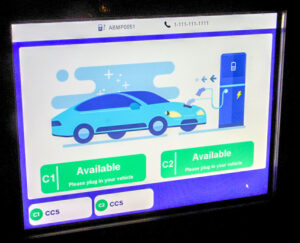 Below the two-level rear load floor, you’ll find a storage bin. It houses a portable Level 1 charger — works best on a dedicated 120-volt/20-amp (AC) »  circuit. VW includes a standard 11kW onboard charger for Level 2/240-volt (AC) charging. It quickens fill-ups: at 32 amps, you get a predicted 20 miles per hour and 40 amps for 27 miles per hour. In contrast, the 120-volt charger replenishes the battery at the rate of about two miles per hour — not road speed — we’re talking 80 hours to fully charge. The ID has a mobility kit instead of a spare tire.

The third option is 125 kW (DC) fast charging at a compatible Level 3 public charging station. Plug in for 40 minutes and you shoot from a 5% charge to 80%. VW projects that a 10-minute fast-charging stint will provide 62 miles. This isn’t intended for everyday use. But it’s certainly handy should you decide to take a day trip, say, from Chicago to Green Bay for a Bears-Packers game and back. Just duck into a fast charger, free at VW dealers (and for three years at Electrify America stations), have a cup of joe and a snack and you’ll have enough mojo to get yourself home. The ID.4’s trip computer says it’s possible.

The EPA-rated range is 250 miles (Some Pro models, says VW’s William Gock, reach 260), Level 2 charging time (7.5 hours) and its combined fuel economy is 97 MPGe means a savings of $4,000 in fuel cost over five years compared to the average new vehicle. Predicted energy cost is $700 a year. These calculations don’t reflect the environmental costs of building the car, its battery or generating electricity for it.

VW recommends an 80% charge level for everyday driving, with a minimum level of 20% in mild weather, 40% in cold weather. Charging stations must be SAE J1772-compatible, which includes a rapid charge connector called CCS — combined charging system. The car communicates and charges via these wires. In the USA, you’ll find several kinds of charging connections. Tesla’s is different from the J1772 used on most other vehicles. Using an adapter, you can plug your VW into a Tesla charger — but not the Supercharger type.

The “frunk” houses various vehicle systems, sorry no stowage here, but this scheme means you get a smorgasbord of front cabin cubbies with provisions for wireless phone charging, drinks and several USB-C ports. Even the rear riders get low-mounted vents and USB-C outlets. 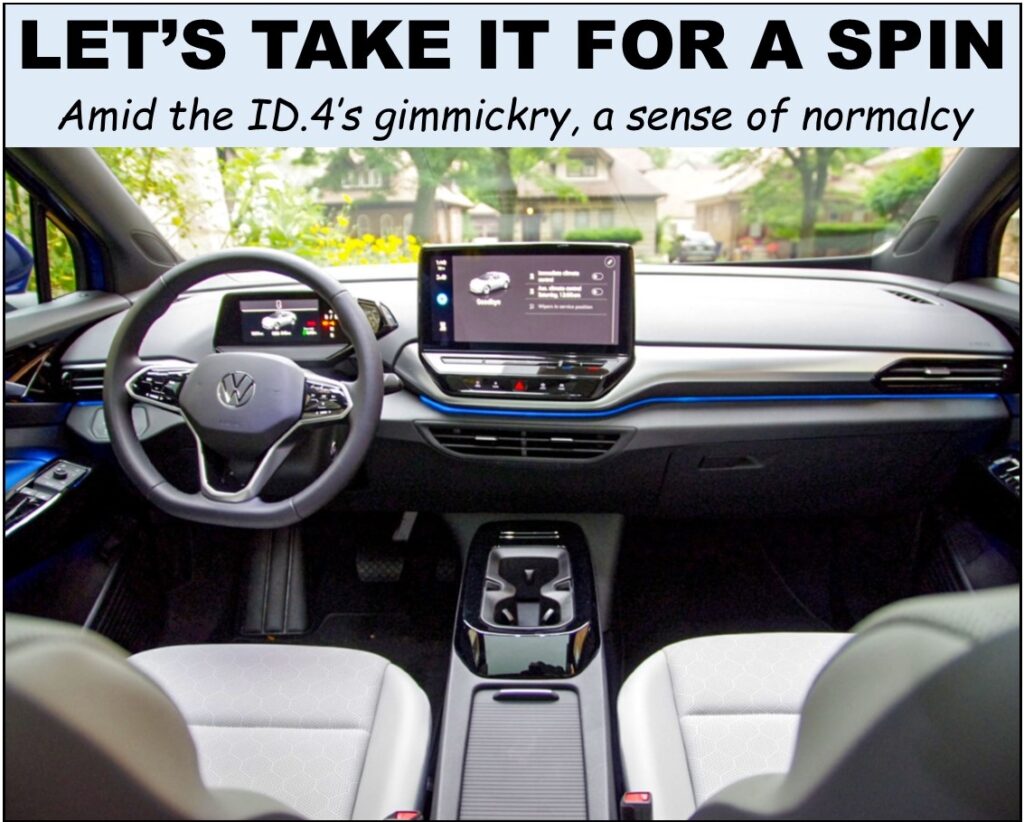 The ID.4 has an intuition for you and what you do. Just carry the key fob and the vehicle swings out its mirrors, cranks up the A/C, turns on the lights (Motel 6-like) and projects funky thumbprint-like puddle lamp patterns from below the sideview mirrors. You enter by tugging the door handle or more accurately touching its back side, which electronically releases the latch. After you’re seated, step on the brake. The ID is ready. Or try the steering column’s pushbutton. . .

. . . to finish reading this story, check your printed Autoist, or click on the cover photo on the Home Page to access the entire issue (logged-in members only).