From beater Bus to dragstrip demon 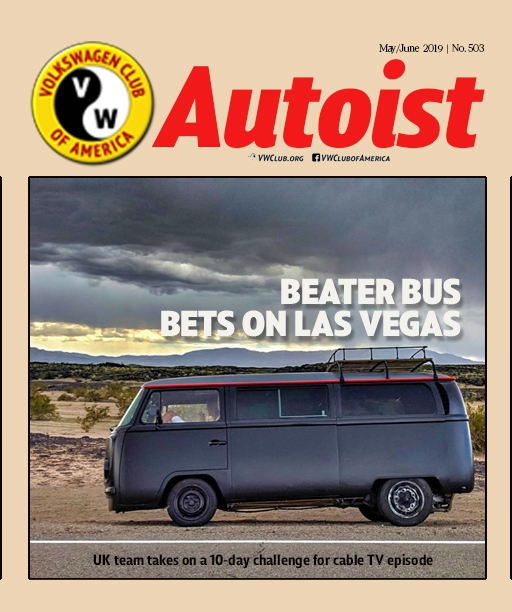 On a Monday in March, two fearless adventurers, Jimmy DeVille and Helen Stanley, started a road trip along America’s West Coast with one objective in mind. To take an old, beat up VW Bus and transform it into a lean, mean, drag machine.  But who were these intrepid explorers and what had inspired this dream?

Jimmy and Helen, along with Ant Partridge, make up the Goblin Works Garage team, a UK-based collective that specializes in taking cars and bikes and turning expectations on their head with the incredible builds they produce. The trio’s efforts are documented on screen for Discovery’s hit international show “Goblin Works Garage,” shown in the United States on Velocity channel, which has entertained millions of car lovers in the UK, USA and around the globe.

After the success of the first series of six episodes in 2018, the Goblins decided it was time to challenge themselves, and what could be more challenging than completing their biggest build ever in just 10 days? All while traveling from San Diego to Las Vegas! As if this wasn’t difficult enough, they would be doing it one Goblin down as Ant had to stay behind to complete a VIP bike build. He wasn’t completely off the hook though — he would have to take up the role as man behind the curtain and set up help along the way for Jimmy and Helen.

The first port of call for Jimmy and Helen was picking up the 1969 Bus that Ant had arranged for them. To keep the cost down and with a new engine install in mind, Ant had opted for the cheapest Bus he could find. But the two Goblins were not prepared for the shell they were about to receive upon their arrival in San Diego.

Deciding not to focus on the negatives, Helen found a silver lining. The Bus had no engine, so this left them with one less job to do — already they were ahead of schedule! They arranged to stop at Subi Swaps across town, a Subaru engine converter specialist and there they threw themselves at the mercy of David White.

Together they chipped in to get the new water-cooled turbo engine installed and to get the Bus on the road. It wasn’t easy but after a lot of blood, sweat and tears, eventually the Bus was mobile again. Now they needed to sort out the exterior.

Agreeing it wasn’t sensible to get a paint job with such limited time before having to take the Bus down a drag strip, Jimmy and Helen decided to get themselves a body wrap, so they pushed on to the next stop, Los Angeles. Helen had heard good things about a place there called Impressive Wraps and, boy, did they live up to their name. The team worked into the night alongside the Goblins, and together they prepped the surface of the beaten-up Bus and started to transform it. Helen and Jimmy decided to take the Bus from its original maroon and give it a dark and moody makeover, opting for a satin black wrap around the sides with a gunmetal gray roof.

Rewarding themselves with a bit of respite while awaiting the completion of the wrap, Jimmy and Helen caught wind of a local car meet and couldn’t resist popping along, discovering the Odd Squad Car Club, and were amazed at some of the vehicles in show. The club had some awesome classic cars and trucks, just the sort of vehicles that spring to mind when you think of the LA car mod scene. Jimmy and Helen were like kids in a candy shop, and the locals had welcomed them with open arms and sounded excited about what the Goblins had up their sleeves for their own Bus mod.

Rejuvenated by their dip in the local car scene, Jimmy and Helen headed back to Impressive Wraps and could not believe the transformation. The Bus was now unrecognizable from before and was closer than ever to being a real Goblin vehicle. The next stop on the tour was Las Vegas.

Now that the Bus looked the part, they needed to make sure it was fit for purpose, so Jimmy called up an old friend, Dino, who could help the guys with the missing pieces. Dino helped fit new racing seats and with the help of Jimmy fabricated a roll cage to make sure the Bus was as safe as possible for the strip. Meanwhile, Helen kept herself busy by fitting the new wheels. After a very long night, the Goblin Bus was complete. The guys had a lean, mean drag racing machine and were ready for action, just in time.

After 10 long days on the road, it was finally time for the Goblins to see if they could pull off the impossible and send this bus down the quarter-mile at eye watering speed. Jimmy had one last trick up his sleeve, though — he couldn’t help but feel that the Bus had been missing something special, so he arranged for third generation pin-striper and Las Vegas native, Shaun Hartman, to add the pièce de résistance, a bespoke hand-painted design onto the Bus. With nothing else left to do, it was time to tackle the strip.

As the day got under way at the track, Jimmy and Helen were taken aback to discover a fleet of VW Buses coming through the entrance to the speedway. Ant had pulled off some last minute social media magic and arranged for a group of local VW Bus owners to attend to cheer on the Goblin Bus and possibly even drum up a sale.

As for how the bus performed on the track? You’ll have to catch this episode of the Goblin Works Garage series to see how it got on.   VWCA