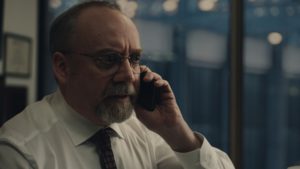 Actors Paul Giamatti (Sideways) and Kieran Culkin (Fargo) star in a three-part ad campaign for VW’s Cross Sport SUV.  Giamatti plays a frustrated accountant reining in a spendthrift client played by Culkin.  He is assuaged, when his client gets a VW—until he learns it’s transportation to a Las Vegas casino.

The ad, therefore, presents the Cross Sport as a stylish, sensible and affordable alternative to conspicuous consumption.  Johanne Leonardo is the creative agency.  The ad debuted on ABC’s The Bachelor.  Two more episodes follow.

In a sense, the ad pays homage to vintage Beetle ads, which extolled the virtues of living large in an inexpensive small car.  A VW as a corrective commodity consumption resonated with many who were concerned about a postwar America’s wasteful affluent society.