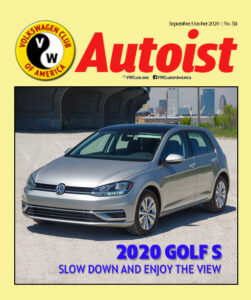 Last year, VW lifted the Golf’s powertrain by yanking out the cast-iron block, 170-hp, 1.8-liter turbo four-cylinder engine and dropping in the alloy-block 147-hp 1.4-liter turbo. VW sweetened the deal by mating the 1.4-liter to either a six-speed manual, (was five) or an eight-speed automatic (was six). Torque was 199 lb.-ft., now it’s 184. Car and Driver initially claimed the smaller engine did nearly as well as the larger one. Then, it published a comparison test finding the manual-tranny Golf was the slowest hatchback, indeed, the slowest of any new car. Top-gear acceleration is tepid — like watching a redwood grow. 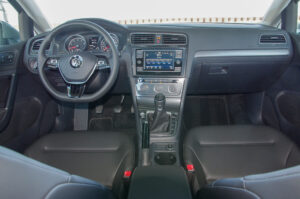 I’m teed off. The reason the Golf proved so sluggish was C and D’s rules of engagement — stick shifts must do the “passing” test in top gear. Its editors didn’t permit those pressing the go pedal to use third gear. As such, the Golf is pokey. Downshift to third, however, and the car pulls briskly from 25 mph to 70 mph. While you might pine for the higher-output 1.8-liter mill, remember it wasn’t geared for sporty driving. Unlike the stick shift, the automatic Golf is considerably quicker, says C and D; it permits automatics to downshift during its test.

Back to the future

VW’s now legendary Golf began its tenure as the brand’s signature model back in the 1970s amid a desperate corporate dash to lop off the elderly Bug. The Golf’s front-drive, transverse water-cooled engine was antithetical to everything VW until then. Suddenly VW went from a purveyor of 1930s-era cars to the most modern of machines. The Golf/Rabbit was roomy, swift, stable and competitive — except in price as Deutschmark devaluation vs. the dollar made it difficult to keep prices attractively low. VW, in turn, opted to build its new hit in the USA. And while it’s the GTI that gets the most ink for revitalizing VW, for a moment in auto history, it was the frugal diesel version that caused scores of car buyers to get a VW.

I mention the old diesel because the 1.4-liter gas Golf’s fuel economy is quite good. I got 38.5 mpg overall. You can easily best 40 mpg on the highway, too. Today’s compact Golf sips gas as if it were a subcompact. That’s a family trait anyone can admire.

Although the Golf is a great package, my tester proved more annoying than “Family Feud” reruns. The rear seat latch rattled, groaning on driveway approaches. The rear-view mirror squeaked, and operating the clutch pedal unleashed a gaggle of honking geese. It’s a shame that such a nifty mode of conveyance should be plagued with so many unpleasant noises. Otherwise, the Golf is relatively quiet. 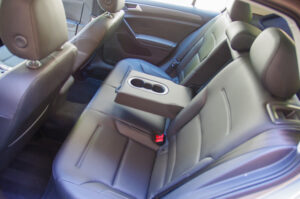 The Golf’s interior is slightly above grade. The driver-canted padded dash pad creates a cockpit that’s more upscale than the Jetta’s. Euro-sleek thumbwheels control vents — another item not found on the Jetta. Some plastic panels are glossy or have metallic-like treatments. Everything fits with businesslike acumen. But the tiny USB-C slot deep in the center console is difficult to use. In contrast, door cubbies are lined and the lighted glovebox innards are flocked. Alas, the decor degrades in the aft compartment where the side-door panels are hard. But you get a split-fold rear seat with pass through.

And behind that is a stout two-level load floor with nifty side tabs so you can prop it up while extracting tools, spare tires, etc. 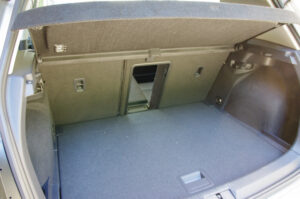 Drivers and front passengers get power-recline bucket seats with manual height and lumbar. The driving position is wonderful. And there’s an adjustable center armrest, too — a great perch for your right elbow. The leatherette wrapped steering wheel apes leather. Analog-style instrumentation is lucid. The infotainment system sports a 6.5-inch touchscreen. It’s smaller and has fewer features than the 8-inch one found on other VWs. And it doesn’t offer the eco-friendly Think Blue Trainer. The instrument cluster’s trip-computer’s screen, however, provides economy data and there’s a gear-shift prompt. If you hang out in fifth gear for too long, a text warning urges you to pick the top cog.

Motoring in the Golf reveals an unobtrusive power train — although I found a few spots in its power band where thrumming or vibration intruded. The most salient thing about it is the gear ratios. They aren’t sporty. Instead, it’s about limbo-low engine rpm. According to Volks, max torque hits at 1,600 rpm and peaks at 3,500 rpm. But as I mentioned earlier, you must row the shift lever in order to accelerate swiftly. Yet, my test car, in sixth gear, effortlessly completed Milwaukee’s interstate system with its hills, valleys and elevated bridges.

Winding through the gears reveals something nice and something awful. One, the nice part: the car’s computer feathers the rpm for you as you release the clutch pedal. At the friction spot, the engine speed increases slightly, preventing stalls. Plus, there’s a hill-hold brake function. Two, the rub: the parking brake lever, however, is rather stiff — although nicely trimmed with glossy plastic upper and leatherette lower. Just ahead of it is a plastic seam for the shifter surround. It’s not groovy; there’s a sharp edge that threatens your fingers.

The basic 6.5-inch radio package has Android Auto and Apple CarPlay, VW says, but a USB-C cable is required and thus potentially an adapter for older phones.

The EPA says 28 city, 36 highway and 31 combined. For the Tungsten silver metallic over black leatherette interior, VW asks $24,114. Think-slow arborists can add a roof rack, making the Golf an economical work vehicle. VW’s Mark Gillies says the Golf S continues as is through the 2021 model year. After that, the automotive grim reaper might chop it from VW’s American lineup.

LOGGED-IN MEMBERS CAN SEE THE ENTIRE AUTOIST ISSUE BY SELECTING “AUTOIST ARCHIVE” FROM THE “AUTOIST” TAB.