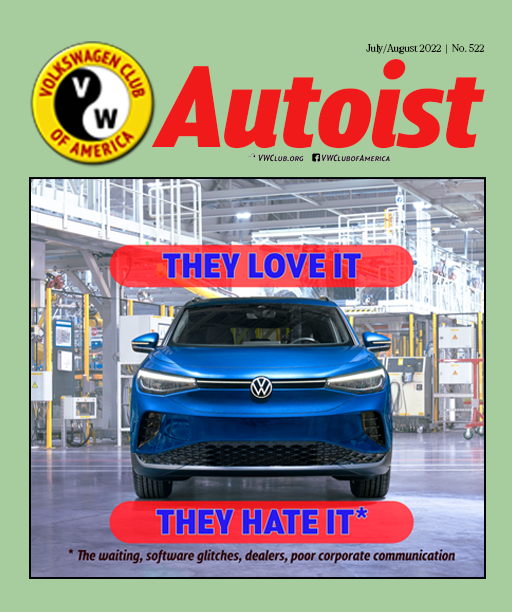 Good news has arrived for Volkswagen and its North American customers waiting not-so-patiently for an ID.4.

The company not only starting U.S. production in July, earlier than projected, but also announced in August that a new cheaper model was in the works, with new features across an expanding line.

It’s been a rough go in VW’s effort to begin a massive, multibillion conversion to electrification.

Post-pandemic supply-chain issues were compounded by the war in Ukraine, where certain key components are produced.

In March, an undisclosed number of ID.4s was among 4,000 VW-branded vehicles worth more than $100,000 million that sank in the Atlantic Ocean with the cargo ship Felicity Ace.

And more than 18 months into the rollout, it appears obvious that software glitches made the cars not ready for prime time.

VW is not alone. In January, Consumer Reports released a report on the reliability of EVs based on survey data from model years 2019-21 involving a 3,533 EV sample size and 21 models.

In April, the National Highway Traffic Safety Administration said it was investigating five automakers covering more than 138,000 vehicles with batteries made by LG Energy Solution of South Korea linked to fires.

VW, General Motors, Mercedes-Benz, BMW, Hyundai and Stellantis have issued recalls since February 2020, most due to internal battery failures that can increase fire risk. (VW has cut ties with LG Energy Solution.) 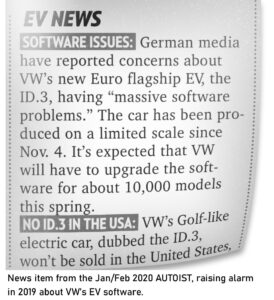 In effect, automakers across the board are encountering challenges in producing safe and reliable EVs.

More troubling for VW, McKinsey and Co., a growth, marketing and sales organization, predicts that the company will lose billions due to delays in its Cariad software division, pushing back rollouts of more ID models along with cars from group brands Audi and Porsche.

Software woes led to the CEO’s dismissal. Two rising-star executives who helped guide the rollout have departed for jobs with high-tech startups.

And, finally, with the Inflation Reduction Act now law, the $7,500 tax credit — which VW marketed in ID.4 sales pitches — is probably wiped out for those who were waiting delivery of a ’22. (See more on Page 28.)

But anecdotal evidence confirms CR’s finding that VW’s EV is popular. With more than 7,000 registered members on Reddit’s ID.4 forum and 9,000 on VWIDtalk, the positive vibe more than outweighs the negative.

Many owners seem from the mold of old-time Beetle devotees who brushed off the car’s shortcomings while embracing its quirky positives, such as:

But the car’s capacitive touch controls and a sluggish interface underpowered by version-2 software in 2021 models are almost universally panned by owners who have relied on knobs to push, pull or turn. MY22 models with third-gen software are said to be more responsive and reliable though not without minor annoyances. No knobs, but at least steering wheel buttons offer some solace.

Many acknowledge frustration acclimating to a new system but come to accept it. After all, it’s an otherwise pleasant means of transportation, not a cellphone. But if it feels like a spaceship, shouldn’t it always act like one? 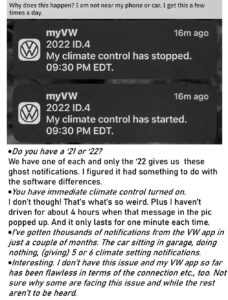 But voices of reason often emerge:

But some problems can be serious, or appear to be. Whether to take alerts seriously can add more stress:

Though anecdotal, reports of electrical system failure pop up in the forums with expressions of fear and relief ranging from “the car is completely bricked” to the problem “just goes away.”

Reports have cited AWD models with front motor failure needing replacement and owners having to wait weeks for new modules. The topic “failed front drive motor” at VWIDTalk has more than 90 posts at this writing including:

(The post continued:) I have a family member who bought a Tesla. She got it soon after I got my ID.4. It died three times. The first two times, Tesla tried to put it on her. It was only after the third time did Tesla finally take the car in for service. It was there for two or three weeks, then she got it back. No problems since. This whole situation makes me think that EVs will have a number of problems until the technology improves. For now, I am willing to roll with it because I love my ID.4.

Yet, the National Highway Traffic Safety Administration shows no consumer complaints for 2022 ID.4s.

Though the sample size is small given the number of cars delivered, a service rep for a St. Louis dealership who checked with his ID.4 techs said, “They are unable to recall any local ID.4s that have had this problem. I have not seen any bulleting or any other communication from VW that there any concerns.”

Meanwhile, “if we ever get a software update” has been a recurring complaint among 2021 owners. Many early customers waited more than a year to get their car, compounded by more weeks of waiting for newer customers while later-built cars sat in U.S. ports getting an incremental update and a more robust 12-volt battery.

Owners of 2022s are getting cars with the latest software and reporting better performance and reliability.

With 2023 models moving into the pipeline, many owners of early 2021s wonder if they’ve been forgotten:

But the St. Louis service rep noted, “VW doesn’t give us a lot of heads up on that stuff.”

From the VWiD4Owners forum on Reddit.com.

Infotainment lags, but my wife and I are using CarPlay or Android Auto most of the time, so it’s not a huge issue. What does suck though is you can’t cancel it connecting to wireless CarPlay/Android Auto, so regardless of who’s driving, it’ll just default to the last phone it used.

Mobile app (myVW) was awful but now is a little better.

We’re in Boston, range loss during the winter is real, and you really feel it on longer road trips. It’s annoying but not a huge issue.

Turning radius on this car is amazing, and it’s great at navigating Boston’s famously terrible streets.

We did a camping trip with two friends to Acadia National Park, and they remarked how comfortable the ID.4 was and fell asleep in the back. Also, the USB-C chargers are fast chargers, which meant everyone easily topped-up their phones and tablets.

Public Level 2 chargers, especially free ones, are usually not worth the hassle (for their slower charging speeds).

Level 3 charging has been great, especially at Electrify America stations. It did take me a while before realizing you need to use the app to start your charging session if you want it to use the free plan. There’s enough of them that we’ve done trips around New England without any anxiety, but you do need to plan your trip around it. [The ABRP app is widely endorsed.]

Home charging is awesome. We only need to plug it in once a week but no more “oh (crap), I forgot to get gas before my appointment this morning.” Also, we avoided how awful gas prices have become. We had a 220v 30- amp circuit and NEMA 14-30 outlet installed in our garage. I use a portable charger (Splitvolt) and might buy a longer one and have it mounted to the wall.

My dad (late 60s) loved it so much he also picked up a 2021 ID4 Pro S RWD! He was lucky enough that his dealership had them. He’s been charging with a 120v outlet and a nearby EA station, but it’s annoying enough that he’s having a Level 2 installed.

All in all, I’m very happy with the car. I’m on a three-year lease, and I’ll either buy this one outright or get a newer ID.4 model in the future.